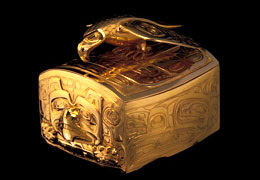 The thieves who broke into a B.C. museum last week and walked off with $2 million in gold artworks wore gas masks and used bear spray, CBC News has learned.

The brazen burglary at the Museum of Anthropology at the University of British Columbia took place Friday night while the lone security guard was out having a cigarette, museum director Anthony Shelton said.

"The security cameras seem to have been working," Shelton said, "and this is just a couple of them. But it seems that they hadn't been recording."

An electronic alarm alerting campus security, responsible for patrols at the museum, was tripped when the cameras stopped recording, but it appears nothing was done about the problem, Shelton said.

There was only one guard at the museum Friday night, and about the same time he left for his smoke break, the thieves moved in wearing gas masks, Shelton said. The burglars then doused the interior of the museum with a powerful bear repellent.

Electronic recordings confirm both audible and silent alarms were functioning at the time, Shelton said. The bear spray would have immobilized anyone who tried to stop the thieves, but it seems no one did.

The guard did not report a problem and the theft was not discovered until the shift change for security guards at 9 a.m. Saturday, Shelton told CBC News.

Shelton said the heist was well organized: three Mexican Zapotec Indian gold-coloured necklaces, which were found despite being hidden in drawers, were the first items taken.

Next came the glass case containing Reid's gold pieces. A dozen items were scooped up, including the famous Golden Box.

The appraised value of all the items is about $2 million, though experts say Reid's pieces are virtually priceless.

Shelton told CBC News he believes the well-organized and professional thieves cased the museum before the break-in. He said he wasn’t sure whether they were only looking for gold, as almost all the gold pieces on display were taken, or whether they were filling a specific order from an international art collector.

Shelton acknowledged police have been questioning staff, but he denied there is any evidence to suggest the burglary was an inside job.

Reid is considered one of Canada's most important 20th-century artists. Four of his works can be seen on the Canadian $20 bill.

The Victoria-born artisan was trained as a goldsmith and worked in sculpture, carvings and jewelry — all reflecting traditional Northwest Coast native culture. Reid's father was Scottish-German and his mother was Haida.

In his 20s, Reid began a career as a radio announcer and eventually ended up at the CBC in Toronto in 1948, where he discovered his jewelry-making skills while taking a college course.

In 1951, upon returning to Vancouver, Reid explored and expanded his jewelry-making business while continuing to work for the CBC. It was the start of an acclaimed career as a world-renowned artist. He died in 1998.

Art Hostage comments:
Memo to thieves: "Cultural Assassins"
Do yourselves a favour and contact Toronto Lawyer Michael Morse, or Dennis Morris, the lawyer who recovered the Thompson Ivories, they will be able to organise the safe return of the Bill Reid items before this whole thing gets out of hand.
Gas Masks and Bear spray, OK professional approach, therefore, make sure the Bill Reid icons are cared for well.
The world and his wife are looking for these Bill Reid Icons and the best thing is they be placed in the safe hands of a lawyer, Morse or Morris, even during negotiations, that way other thieves will not be able to steal them off the original thieves.
As much as the Canadian people are outraged by this theft, the Canadian people can be counted on to forgive the thieves if the Bill Reid icons are quickly returned un-damaged.