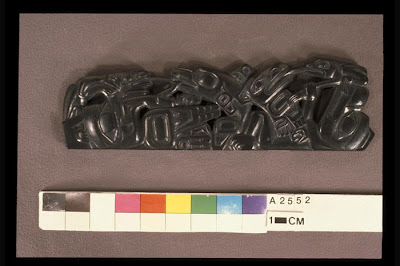 http://canadianpress.google.com/article/ALeqM5j2tvdnt7wm_tUo5jM9paHWt4X3mg
VANCOUVER — The last two priceless works by artist Bill Reid have been recovered nearly three months after they were stolen from a museum at the University of B.C.

But one of the items, a carved pipe, is broken and about five centimetres of the artwork - made from a black slate-like material called argillite - is still missing.

Const. Annie Linteau of the RCMP's E Division in Vancouver says in a statement that investigators could not issue details of the recovery sooner to avoid compromising the investigation.

The Mounties aren't saying when the pipe or an intact eagle brooch made of gold were found.

Police are asking for information leading to the recovery of the final five centimetres of the pipe.

Three people were arrested in June after 10 pieces by the Haida master were stolen, along with three artworks from Mexico, in the daring May 24 heist at the Museum of Anthropology.

Last 2 stolen art pieces by Bill Reid recovered
http://www.cbc.ca/arts/story/2008/08/20/bc-bill-reid-pieces.html
RCMP have found the remaining two of a dozen pieces of Haida artist Bill Reid's work that were stolen about three months ago from the Museum of Anthropology at the University of British Columbia.

A gold eagle brooch was recovered intact, but five centimetres of a carved argillite pipe were broken off and are still missing, RCMP spokeswoman Const. Annie Linteau said Wednesday.

"We're asking anyone who has information about the whereabouts of the missing piece to please call police immediately," Linteau told CBC News in a telephone interview.

Police found 10 of Reid's stolen pieces and the three Mexican items in June at two residences in the Vancouver suburbs of Burnaby and New Westminster. Three people were arrested and then released at the time.

The last two pieces were found in two separate searches on July 23 and Aug. 11. Linteau didn't reveal the locations at which the artworks were recovered.

"We're continuing our investigation. We're in the process of completing a report to Crown counsel in which we'll be recommending charges against an individual or individuals," she said.

Police expect to submit the report to Crown lawyers in the next couple weeks, she said.

All the recovered Reid pieces have been returned to the Museum of Anthropology and will be examined to determine suitability for exhibition when the museum re-opens in March next year, police said.

The three Mexican jewelry pieces, which were heavily damaged, remain in police hands.

Art Hostage comments:
The drip, drip, affect of releasing information about the recovery of the Bill Reid icons may soon turn into a torrent.
Posted by Art Hostage at 6:19 pm