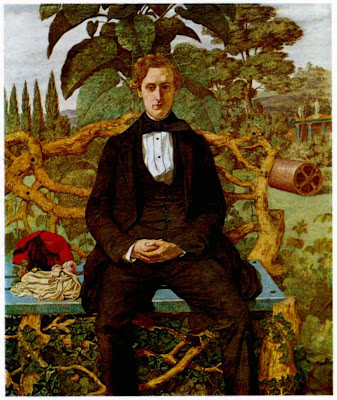 A THIEF is on the run after failing in an attempt to swipe a painting from the Museum of Croydon yesterday (Thursday) afternoon.

Officers from the Met's Art and Antiques Unit were called to the museum, in the Croydon Clocktower, in Katharine Street, after the incident.

The attempted theft, which happened around 12.45pm, was of a painting by Richard Dadd, entitled "Portrait of a young man".

Police say the painting is safe and undamaged and will remain on display with increased security.
Anyone with information should contact the Met's Art and Antiques Unit on 0207 230 2150 or Crimestoppers, anonymously, on 0800 555111.

Art Hostage comments:
Madness, bloody madness !!
-
Richard Dadd the artist stabbed his father to death thinking he was the killing the Devil, Dadd was sent to the mental asylum Bedlam and spent his last 42 years in custody.
-
There is a bad vibe about stealing a Richard Dadd, so it seems ironic this attempt was thwarted, especially as nearly all art heists prove to be successful.
Posted by Art Hostage at 7:17 pm