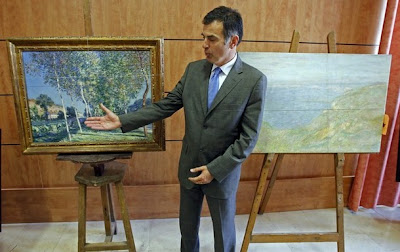 A gang armed with rifles and explosives has stolen several million euros from an armoured van which was transporting the cash to a bank in southern France.

About a dozen masked robbers used several cars to block the van in the village of Gemenos, near Aubagne.

Reportedly armed with kalashnikovs, the gang then used explosives to blow open the doors of the vehicle and break into its security boxes.

The Sazias security van was said to be carrying a total of 8m euros (£7.1m).

The robbers were only able to break into two of four security boxes, making off with around half of the money being transported, said a spokesman for Sazias.

After a brief shootout with local police, the gunmen escaped and their vehicles were found later on Monday, abandoned and torched.

"This was a very organised gang," Marseille prosecutor Jacques Dallest was quoted as saying by AFP.

"They were able to break into the van using explosives, which suggests that they had serious means at their disposal."

The van had been heading to Toulon to deposit cash at a Banque de France branch.