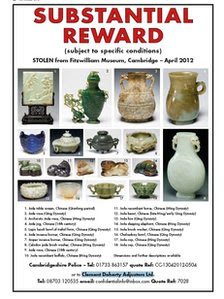 A fifth man has been charged following the theft of millions of pounds worth of Chinese art from a Cambridge museum.
Thieves took 18 "valuable and culturally significant" Chinese artworks, mostly jade, from the Fitzwilliam Museum in April.
Thomas Kiely, 21, of Giraud Street, Tower Hamlets, London, has been charged with conspiracy to commit burglary.
He is due before Cambridge Magistrates' Court later. Four men were sentenced over the burglary in September.

Anyone attempting to claim a fee or reward for recovery of the Lord Nelson ring etc or any of the Fitzwilliam Jade will be arrested and subject to criminal charges. Anyone who suggests they represent the Norwich Museum or Fitzwilliam Museum is in reality an Undercover Police Officer.

Art Hostage says: The reward offered by Clement Doherty Adjusters Ltd for the Fitzwilliam Jade is bogus, false and designed to lure people with information in, so when they inquire about the amount, and then ask for an amount, before offering the information, Police, Clement Doherty Adjusters Ltd and Insurers can arrest them, and under threat of criminal charges, using the 2002 Proceeds of Crime Act.

However, Art Hostage can make sure these pitfalls are avoided and a fee would be payable, not a reward, a fee, for exclusively giving information that leads to the exclusive recovery of the Fitzwilliam Jade, no arrests, no false reward promises.

Art Hostage would also make sure those with information are protected from scrutiny and warn well before they reveal anything if a fee cannot be negotiated.

Finally, any call to Clement Doherty Adjusters Ltd will be passed directly to Police immediately, forthwith and the Pre-planned undercover operation will swing into action.
-
You don't have to believe Art Hostage but then don't whinge and cry when you are arrested.
-
However, if you have information that could lead to exclusively recovering the Fitzwilliam Jade, Lord Nelson's ring or any other stolen artworks, Art Hostage must be your first Port of Call, the person you consult first and foremost, why, because Art Hostage will tell the truth and give an opportunity to walk away unscathed.
Posted by Art Hostage at 11:52 am