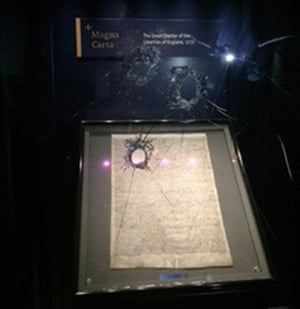 An American tourist who tackled a knife-wielding thief trying to steal a £20million Magna Carta from Salisbury Cathedral has spoken about his heroics.
Matt Delacambre managed to hold onto the hooded man until security were able to arrive and apprehend the suspect.

The 56-year-old said: ‘I couldn’t let him get away with it. The Magna Carta is one of the most important documents in the world.’
He told the Sun: ‘There was a lot of confusion but no panic or screaming. It was very English.’
The historic document dating back to 1215 and described as the ‘best original’ out of the four copies made, was enclosed in a two-inch thick glass case in the cathedral and had been on view for the tens of thousands of visitors who visit every year.
Police said that they had been alerted after someone smashed the glass case and after arriving at the cathedral, they conducted a thorough search of the grounds and arrested a 45-year-old man on suspicion of trying to steal the Magna Carta.
Courageous staff helped wrestle the suspect to the ground for 12 minutes after he attempted to flee, Rev Canon Nicholas Papadopulos said, adding today was the first time anyone had tried to steal the Magna Carta.

Rev Canon Nicholas Papadopulos hailed the bravery of Mr Delacambre.
He said: ‘Matt acted couragously and I’m hugely grateful.’
A replica has been put in its place as security measures at the cathedral are assessed.
‘The damage to the glass case triggered the alarm,’ he said. ‘The man who attacked the case then left the Chapter House.

‘There were cathedral volunteers, staff and members of the public in the vicinity at the time. He ran into the Cloister and tried to leave the Cathedral through the works yard. He was then detained by our works yard staff.’

Raymond Molin-Wilkinson, 66, of Salisbury, Wilts, was taking pictures around the city when he saw a group of around 100 people evacuated from the cathedral.
‘I was just outside the building when it happened,’ he said. ‘There was suddenly an evacuation I think – there was an alarm going in the building.

‘The fire brigade and police arrived on the scene, and the police went to the back door of the building and took a gentleman away in the back of their van.
‘There were about 100 people standing outside the cathedral a mixture of tourists and choristers in their blue gowns.

‘They seemed to be quite calm, with many of the drinking coffees and still eating their cakes from the cathedral café – I think they thought it was just a false fire alarm.
‘They were there for about an hour – it was around 6pm that they were allowed back inside the cathedral.’

A spokesman for Wiltshire Police said: ‘A 45-year-old man is in custody this morning arrested on suspicion of the attempted theft of the Magna Carta.
‘Shortly before 5pm yesterday alarms were activated at Salisbury Cathedral after an attempt was made to smash the glass box surrounding the Magna Carta. Staff were alerted and police were called.
‘A man matching the description given by witnesses was arrested on suspicion of attempted theft, possession of an offensive weapon and criminal damage and has been taken to Melksham Police custody for questioning. He remains there,” said the spokesman.

‘The Magna Carta has not been damaged and nobody was injured in the incident. We are aware there were a number of witnesses to the incident who may not have spoken to police.
‘If this was you, please get in touch via 101 and quote crime reference number 541800101438.’
The disturbance once again thrusts the Wiltshire city into the spotlight after it became the focal point of tensions between Russia and Britain.
Two Russian men were accused of attempting to assassinate former spy Sergei Skripal in Salisbury using a highly toxic nerve agent.
The pair prompted ridicule when they claimed they had been visiting the city as tourists and wanted to see the cathedral.
The Magna Carta, Latin for Great Charter, was brought into law under King John of Runnymede on 15th June 1215,.

It was credited as being one of the first documents to limit the power of the crown.
The charter was imposed upon the king by a group of his subjects, the feudal barons, and limited his powers on the likes of punishing a ‘freeman’, unless through the law of the land.
But the document didn’t last long, with Pope Innocent III annulling it in August 1215, because it was a ‘shameful and demeaning agreement, forced upon the King by violence and fear’.
After King John died, his successor Henry III thought it was a good idea and brought it back.
Three clauses of the 63 are still in force today – freedom of the English Church, the ancient liberties of the City of London and a right to due process.
It was written in Latin by hand, by an expert scribe, on parchment. The Magna Carta was not signed, but sealed, and at the bottom of our Magna Carta you can see the marks where King John’s seal was once attached.

There are just four remaining copies of the Magna Carta. Two are kept in the British Library, one is in Lincoln Cathedral and one at Salisbury Cathedral, which is the best preserved manuscipt.
Shortly after the originals were sealed, 250 copies were made but just 17 are thought to still exist.

Detectives are appealing for information about a silver Audi S5 suspected to have been involved in the offence.

The famous Portland Tiara, a national treasure that has been seen by countless members of the public, has been stolen.
Burglars broke into the Portland Collection Gallery at the Welbeck Estate in Worksop, between 9.45pm and 10pm on Tuesday night, November 20.
Police said they stole the tiara and a diamond brooch from an armoured glass display case while the alarms were sounding.
Detectives are appealing for information about a silver Audi S5 suspected to have been involved in the offence.

"The Portland Tiara is one of the great historic tiaras of Great Britain," said Richard Edgcumbe, curator of jewellery at the Victoria and Albert Museum in London.
He added: "Since its creation by Cartier in 1902, using diamonds from the historic collections of the Dukes of Portland, it has been recognised as a jewel of supreme importance, a superb design magnificently executed."
The 6th Duke of Portland commissioned Cartier to create the Portland Tiara for his wife, Winifred, Duchess of Portland.
She wore it to the 1902 coronation of King Edward VII.
The Duchess was one of four pall-bearers at Queen Alexandra’s anointing.
The centre-piece of the tiara is the Portland Diamond, which dates from the 19th century.
It is flanked by two diamond drops and other pendant diamonds, all set in gold and silver.
The burglars also stole a diamond brooch, which was in the same glass display case.
The brooch is composed of diamond clusters that previously stood at the apex of the tiara.

These gems can be seen on the tiara in a painting of Duchess Winifred at the anointing of Queen Alexandra but are absent from it in a 1925 portrait of the Duchess, in which she wears the tiara low on her head as a bandeau.
Detective Inspector Neil Humphris said: "We're pursuing a number of lines of enquiry but we believe there are people out there who may have crucial information that could help with our investigation.
"We particularly want to hear from anyone who has any information about a silver Audi S5 which is suspected to have been involved in this offence.
"This vehicle was found abandoned and burnt out in Cross Lane, Blidworth, about half-an-hour after the incident.
Art Hostage Comments:
Associates of the man who tried, thankfully in vain, to steal the Magna Carta, have stolen the Portland Tiara to use as leverage to get indictments dropped against their criminal associate.
The Portland Tiara will be offered back if the indictments against the attempted Magna Carta Thief are dropped.
Posted by Art Hostage at 2:27 pm