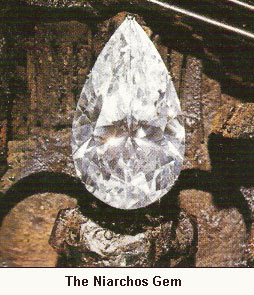 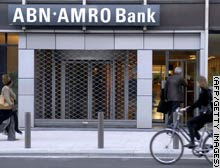 Thieves stole the gems from this bank in the Pelikaanstraat, in the heart of Antwerp's diamonds district.

BRUSSELS, Belgium (AP) -- Belgian police have offered a €2 million ($2.6 million) reward for tips that help them track down a man who stole €21.3 million ($28 million) worth of diamonds from an Antwerp bank last week.

Prosecutors said they are searching for a man who broke into open safety deposit boxes in an ABM Amro bank in the city's diamond quarter.

Police are unsure how he did it but believe he may have carefully planned the robbery, becoming one of several trusted diamond traders given an electronic card to access the vault. The suspect had been a regular customer at the bank for the past year, giving the name Carlos Hector Flomenbaum from Argentina.

They now believe that the suspect was using a false identity because a passport in that name was stolen in Israel a few years ago.

They released a composite photo of a gray-haired man, 1.90 meters (6 foot 3) tall and aged between 55 and 60. They said he speaks English with an American accent and often wears a baseball cap, and they are appealing to anyone who got to know him during his time in the city to come forward.

The bank discovered the theft on March 5, believing that someone took the stones that Monday morning or the previous Friday from a vault used by pawnbrokers and diamond cutters.

Police did not say why they had waited over a week before making the theft public, nor did they mention who had put up the reward money.

The stolen diamonds weigh 120,000 carats and include some very unusual stones, police said.

The diamonds will be difficult to sell on world markets, said Philip Claes, spokesman for the Antwerp Diamond Council. He told Belgium's RTL-TVI television network the haul included both cut gems and rough diamonds which cannot be sold without certificates of origin to show they have not come illegally from war zones.

In 2003, in the world's largest safe-deposit box theft, thieves in Antwerp prized open 123 boxes, finding so much loot they could only carry away $100 million worth of diamonds, gold and jewelry.

More than half the world's diamonds are traded in Antwerp's gem district, a maze of tiny streets hugging the main train station. Its turnover of $23 billion a year makes it one of the densest concentrations of valuables on earth.
Art Hostage comments:
Before the insurance company pays out on this claim they must investigate the inside job and the real prospect that these diamonds will return through the Antwerp market when the Insurance money has been received.
The same people who were robbed will no doubt be involved in the illegal trading of these diamonds. It is well known in the Diamond trade that they have an insurance claim now and again. It is the honest policy holders who pick up the tab for these criminal diamond dealers.
Just try and collect the reward and you will see that not only will the reward not be forthcoming, but if you have real decent intelligence you will be hung out to dry.
Best guess, Semi, from Russia will be the person who may become the new owner of these stolen diamonds, if they were really stolen.

VIENNA: Austrian police have arrested a Croatian ex-general sought on suspicion of stealing $US5 million ($NZ7.34 million) worth of diamonds entrusted to him in an arms deal during Croatia's secession war, Austria said.

Zagorec has been living in Austria since 2000, Gollia said. The authorities knew his whereabouts and he had made no attempt to hide or resist arrest, he said. A judge will decide on Wednesday whether he will remain in detention.

Zagorec's Austrian law firm Lansky, Ganzger told the Austrian news agency APA their client denied the charges brought by Croatia, dismissing them as a political ploy. They said the arrest was unwarranted as Zagorec did not try to escape or hide.

According to Croatian media reports, authorities suspect that Zagorec received diamonds from an arms dealer to guarantee the dealer's delivery of anti-aircraft rockets worth $US5 million during Croatia's 1991-1995 war of secession from the former Yugoslavia.

The authorities allege that he did not record the deposited diamonds in the ministry's books and took them with him when he left his post.
Posted by Art Hostage at 5:20 pm