http://www.wimbledonguardian.co.uk/news/topstories/display.var.1926464.0.antiques_recovered_from_de_morgan_theft.php
Antique ceramics stolen from the De Morgan Centre in Wandsworth have been recovered by detectives.

Police believe burglars broke into the museum in West Hill, Wandsworth, on July 29 after climbing a ladder and getting in through a first floor toilet window.

Another plate was smashed into pieces and a vase damaged after the burglars broke a glass display cabinet holding the antiques.

A £15,000 reward was offered for information leading to the return of the ceramics.

The recovered art works were all William de Morgan pieces, some comprising unique pieces of art.

The ceramics were found in south London on Friday.

Police say no arrests have been made and inquiries are continuing.

Detective Sergeant Vernon Rapley of the Met's Art and Antiques Unit, said: "We are really pleased to have been able to return these beautiful objects in time for Christmas.

"We have been assured by the De Morgan Centre that they will be put back on display so that public can once again enjoy them."
Art Hostage comments:
What a wonderful Christmas present for the people of London.
Well done to **** ********* for enabling this recovery to happen.
However, as with all recoveries of stolen art, the sting in tail is whether any of the reward money is paid ??
That decision is wholly for the investigating Police to make.
Anyone claiming the reward must satisfy Police, who then will give a letter of absolute discretion to the Loss Adjuster, who can then pay the reward.
Alternatively, if the reward claimant is a registered Police Informant/Sewer Rat, the reward will be paid backwards, Loss Adjuster to Police, who pass the money to their Informant/Sewer Rat.
I must say it is really gratifying to see these ceramics returned for the public to enjoy.
Looking forward to 2008, the Chinese year of the Rat, perhaps we may see many more important stolen art recoveries.
However, 2008 could also turn out to be the year when iconic art is stolen with more vigour and regularity than ever seen. 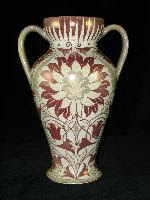