Stolen Art Watch, We'll Give You a Medal of Honour for Recovering the Stolen VC's !! 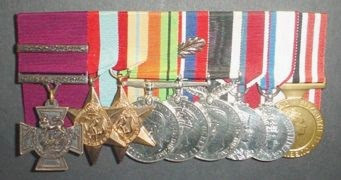 Prime Minister Helen Clark says all hopes are on an effective police operation to stop stolen military medals being moved out of New Zealand.

Interpol has been alerted to the theft of nine Victoria Crosses and a Bar, and two George Crosses.

The Victoria Cross and Bar awarded to Charles Upham were among the medals taken in the break-in at the Army Museum at Waiouru early on Sunday morning.

Miss Clark says her best guess is that it was a "steal-to-order" theft.

She says a law passed last year enabled New Zealand to sign up to international conventions on stolen cultural items.

Miss Clark says if the medals turn up in countries that are parties to the conventions, New Zealand will have legal means to have them returned.

Border alert
Customs has issued a border alert in case of an attempt to take the medals out of New Zealand.

Ruapehu Inspector Steve Mastrovich says police are looking at CCTV footage from inside the museum, and also plan to look at footage from service stations within two hours' driving distance of Waiouru, in the central North Island.

He says police and ESR forensic scientists have recovered items outside the museum but whether they are germane to the inquiry remains to be seen. He says at this stage nothing appears to have been left behind by the offenders.

He also says the scene examination may be finished by midday on Tuesday.

The thieves gained entry to the Valour Alcove, where the medals were kept, and left the museum via a fire escape at the back of the building.

Inspector Mastrovich says the theft is a 'stupid' crime and says those responsible will find it difficult to sell such well-known national treasures.

Colonel Seymour described the theft as a "well-planned mission", saying the perpetrators must have been in the museum previously to observe what was going on.

He says a patrol was in the area at the time the alarm was set off and the building's own security guard was on the scene within three minutes.

Colonel Seymour says security cameras are mounted over the display cabinets that held the medals, and in many other parts of the museum.

The museum remains closed, with the commander of the Waiouru Army base, Colonel Roger McElwain, saying security will be progressively updated, although some action will be taken immediately..

Ransom theory
A Victoria Cross expert says he believes the stolen medals are likely to be held for ransom.

Michael Maxton is the curator for The Michael Ashcroft Trust in England, which cares for a tenth of the 1357 VCs awarded since 1856.

He told Nine to Noon the fact that relatively few medals were taken showed the thieves knew exactly what they were looking for.

Mr Maxton says those responsible would have known the medals would not be able to be sold, meaning they would likely be held for ransom.

He says a theft of this scale from an historical institution is unprecedented.

Reward suggested
Charley Hill, a former detective from Scotland Yard's art and antiques unit who recovered The Scream by Edvard Munch, says the most realistic way of getting the medals back is for the police to offer a reward and wait for someone to surface.

Police have said it is unlikely a reward will be offered.

The Army says the collection of medals would be valued in the millions, but its importance to the country is immeasurable.

Chief of Army, Major General Lou Gardiner, told Morning Report the Army feels violated by the theft and it will have to review security.

Highest honour
The Victoria Cross, inscribed "For valour", is the highest honour in the British and Commonwealth military.

Twenty-one VCs and one Bar were awarded to New Zealanders before the Victoria Cross for New Zealand was instituted in 1999.

Amongst the VCs taken in the raid were the VC and Bar awarded to New Zealand's most decorated soldier, Captain Charles Upham, for valour in Crete and North Africa during World War II.

Captain Upham, who died in 1994, was only the third person, as well as the only combatant soldier, to have been awarded the medal twice.

Two George Medals, awarded to civilians for great bravery, and an Albert Medal, awarded for lifesaving, were also stolen.

Only 22 New Zealanders have been awarded Victoria Crosses.

In a statement issued on Sunday, Major General Gardiner said the value of the medals is what they symbolise:

"These medals were awarded to their recipients for their extraordinary valour and have come to symbolise the huge sacrifices that all New Zealanders made in the many conflicts fought for the freedoms we have come to accept."

Major General Gardiner said the theft of the medals is a theft from New Zealand.

The Victoria Cross for New Zealand medal recently awarded to Corporal Willie Apiata is not among them.

Police are appealing to anyone who was in the Waiouru area, or passing through, between midnight and 2am Sunday to call 0800 VALOUR, or 0800 825 687, from Tuesday morning.

By refusing to offer any reward for recovery or arrests, authorities are making further iconic art thefts less likely and attractive to thieves.

This does not help recover the stolen iconic medals, or the stolen Cavalier painting taken this year in Australia.

However, our Antipodean friends are leading the courageous fight against high value art theft by refusing to offer rewards, false or not.

It is about time Law Enforcement were banned from accepting information from public and informants, this will show how competent Police are using their own initiative and talent.

Currently, 85% of Police Detective work is done by public and informant information, giving some Police Officers the ability to serve their time in a Dilatory, lazy, and incompetent manner, just waiting to collect their pension.

Upon another note, as the medals stolen were awarded for Valour, then it is only right to offer a Medal of Honour for recovering them, rather than some false promise of reward money.

The recipient of this Medal of Honour for recovering the stolen VC's, etc, can then use the kudos surrounding their medal award to make money with the story.

Keep up the good work.