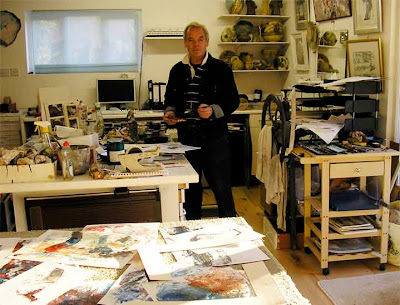 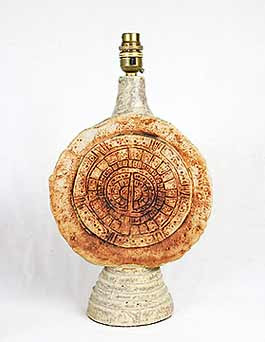 It was the auction that never was, as police tried to trace a thief who stole £30,000 worth of paintings and pottery from the personal collection of Suffolk artist Bernard Rooke.

Art enthusiasts filled the auction rooms at Gaze and Sons in Diss each hoping to pick up one of the 34 pieces of Rooke's work being auctioned off.

But people soon began to realise that no matter how high they bid, a telephone bidder always beat them. And as each piece fell to the art collector on the phone, those in the room began to laugh among themselves and make wild bids which all failed.

It was later revealed police had taken custody of the paintings, none of which had actually been sold. And a 31-year-old Ipswich man was today arrested on suspicion of theft in connection with the incident.

“It was surreal, a very strange auction,” said Rooke fan Steve Skippings from Tiptree, Essex, who was one of the bidders.

“We got to the auction early and the police were there but left before the auction started - but once it got under way it soon became clear that things were not going as expected as no matter what people in the auction room bid the person bidding by telephone out bid them.”

He added that after the auction, last Saturday, he emailed Mr Rooke to congratulate him that his work was so popular.

“Mr Rooke called me back and told me that the work that was in the auction had been stolen,” said Mr Skippings.

“It is now clear to me that the auction was just an act so as to not alert the vendor of the Rooke art work that something was wrong.”

Mr Rooke, 69, from Swilland, near Otley, said it was only when he saw that the auction catalogue - sent to him by Gaze - that he realised the paintings had been stolen.

“Between 70 and 80 pieces have been taken from my personal collection which I have been amassing for some years, I would estimate they are worth between £20,000 and £30,000,” he said.

“The work was never for sale it was a record of work of various techniques, etc. It was being stored in my old studio while a new one was built, I believe the thief had broken into the back of the studio and had been removing work for sometime.”

Gaze's spokesman, Elizabeth Talbot, said the vendor had signed title to the works and they were only alerted that something was amiss when the police arrived shortly before the sale started, intending to confiscate the works.

“They came here to seize them but realised some were delicate and that they had no suitable packaging, so they left with the instruction that we were not to sell them to anybody. And no money changed hands,” she stressed. .

With 550 lots of post war modern design art, including other works by Rooke, it was decided to go ahead with the sale as normal - but for Gaze's to secretly “buy back” the 34 pieces whose ownership was in dispute. Other telephone bids were authentic.

“It was a tough call and I was on tenterhooks. We wouldn't have wished to mess anyone around, we were acting on police instructions not to enable the paintings to disappear. The worst thing that could have happened is that, if we hadn't acted quickly, the paintings were scattered. In effect we were buying them back for the true owner,” she explained.

Ms Talbot added: “I have been in the business for 23 years and I have never known the like! Ironically, it was easily the best sale of this kind we have had, with bidders from London and Scandinavia. Everything was fine except for this weird situation with 31 lots that, as it turns out were probably spurious. People may be disgruntled, but far better it happened than to be inconvenienced later down the line.”

A police spokesman said a 31-year-old Ipswich man had been arrested this morning on suspicion of theft in connection with a burglary in High Road, Swilland, where various pieces of art work were stolen between November 1 and February 6.
Art Hostage comments:
Further evidence that even morons are getting ivolved with art theft.
To really think these artworks could be sold through auction without alarm bells ringing shows jusy how stupid this moron was.
However, for every moron like this one, there many more cunning handlers of stolen art out there, who handle stolen art and antiques every week with impunity.
Posted by Art Hostage at 5:41 pm