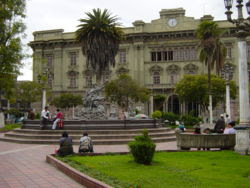 QUITO, Ecuador—Colombian police have arrested four suspects in a theft of religious treasures from a museum in Riobamba, Ecuador, Bloomberg reports.

The police found part of the 1705 Riobamba Monstrance, which is used to display the host in processions in the Roman Catholic liturgy, as well as other artifacts including a golden crown, scepter, and cape of a statue of the Virgin Mary, which were stolen from a religious art museum in Riobamba last October.

The monstrance is made of gold and silver and encrusted with thousands of diamonds, pearls, emeralds, and other precious stones. It weighs 36 kilograms and is valued at several million dollars.

The one-meter-high base of the monstrance has not been recovered.
Posted by Art Hostage at 5:33 pm