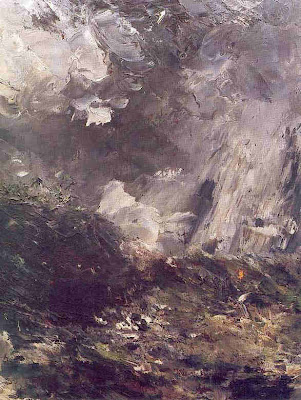 Police found the painting _ Svartsjukans Natt, or «Jealousy's Night _ during a raid of a home in a Stockholm suburb late Thursday in an unrelated case Police
spokesman Lars Alm said.

The painting was stolen from Stockholm's Strindberg Museum in 2006, when thieves removed it from the wall while distracting museum staff. It is estimated to have an auction value of more than 10 million kronor (€1 million; US$1.5 million).

Alm said two men arrested in the raid were suspected of theft or receiving stolen goods.

The painting appeared to be in good condition, Strindberg Museum chief Stefan Bohman said, adding that police would return it to the museum after completing the investigation.

The glass, the frame and the canvas are all whole, he said. It means a lot that it's back. The painting is a central piece in Strindberg's production and in Strindberg's life.

Strindberg, one of Sweden's most famous novelists and short-story writers, painted the work in 1893 in Berlin. It is believed to have been an engagement gift to his second wife, Frida Uhl.

Strindberg died in 1912. His most famous works include the play Miss Julie and the novel The Red Room.

Art Hostage comments:
Yet another connection between drugs and stolen art being used as collateral.
The chance discovery of this stolen painting is either a sad reflection of the low priority given to art theft, or this was a set up and the chance nature is being used as a smokescreen.
It's up to you, take your pick !!