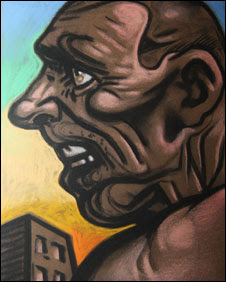 Howson artwork stolen from house
http://news.bbc.co.uk/1/hi/scotland/tayside_and_central/7851219.stm
Four paintings by renowned Scottish artist Peter Howson have been stolen from a house in rural Stirling.

Central Scotland Police said the paintings, each measuring 12in by 10in and featuring the Hardman's Face, were taken from a house at Croftamie.

The force said the pictures were each worth a four-figure sum and has urged anyone with information about their whereabouts to contact them.

Howson is best known for paintings of the Bosnian war and the singer Madonna.

Police said the paintings were not in frames and have asked anyone who may have "innocently" bought them or been asked to frame them to get in touch.

They could not say whether or not they may have been stolen to order.

Howson, 50, who studied at Glasgow School of Art, is renowned for his powerful figurative work which has been collected by celebrities such as Madonna, David Bowie and Bob Geldof.

He became established in the 1980s as one of the New Glasgow Boys, a group of painters concerned with portraying social issues.

Art Hostage comments:
Another day, another art theft, move along, nothing more to see here !!
Posted by Art Hostage at 4:32 pm