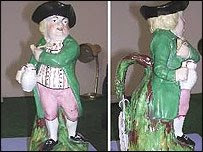 TWO men accused of the violent robbery of an Aldsworth home where the elderly homeowners were tied up and threatened, have appeared in court today (Monday, January 5).
The re-trial of Wolfgang Schmelz (57) and Christopher Doughty (48), who are both charged with robbery, begins tomorrow (Tuesday) at Hove Crown Court.

This afternoon the men, both from Southampton, watched as a jury of eight women and four men was selected.

In April last year, the first jury failed to reach verdicts on charges Schmelz and Doughty staged a violent robbery at Aldsworth Home in Westbourne in June 2006.

Antiques dealer Philip Capewell (64) was sent to prison for five years for conspiring to handle stolen goods taken from the robbery.

Another man, William Johnson also of Southampton, was charged with robbery alongside Schmelz and Doughty but was found not guilty.

During the break-in, Thomas and Sarah Williams were tied up and threatened to have their fingernails removed by pliers if they did not co-operate with the robbers.

A gang took possessions worth £380,000 including medals, swords, guns, silver and porcelain, and then made off in the couple's car.

The re-trial of Schmelz and Doughty is expected to last for four weeks, but could run into a fifth week.
Posted by Art Hostage at 6:21 pm