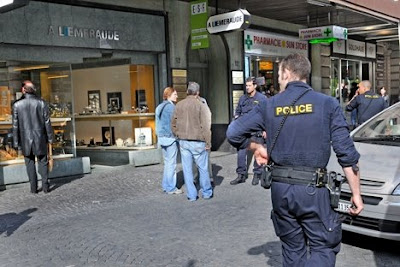 The judge calls for extradition of the "Pink Panthers" of St. Francis
LAUSANNE The magistrate in charge of robbery of jewelry "At Emerald has launched international arrest warrants against the two authors of theft arrested last week in France.

He is seeking the extradition of these alleged members of the gang of "Pink Panthers", but it is too early to know if these two men will be transferred to Switzerland.

As it stands, several options are open, "said Mayor J. Christian. Other countries, including France itself, could obtain priority or agree to try the offense committed in Lausanne. Contacts are underway, notably with the French authorities.

Imprisoned in Paris, the two gangsters are accused of pointing with firearms a jewelry store in Lausanne and have stolen hundreds of luxury watches on May 5. Their booty amounted to some two million Swiss francs.

During their arrest, French police and presented as "big fish" of the "Pink Panthers". They have committed extensive robberies of jewelers in France, in Monaco, but also in Germany. Other robberies in the United States, Japan or the Middle East could be charged

St-Pierre on 19.05.2009 - 19:08 commented:
Knowing the laxity of justice Vaud, including the Attorney Eric Cottier who takes up the case of offenders, the two "Pink Panthers" have any interest in returning to Switzerland, they will be released within days. However they may spend several years in the shadows in the France of Sarkozy.
Art Hostage comments:
If these Pink Panthers go back to Switzerland they will get a slap on the wrists, if they stay in France they get 6 years jail time, approx !!
Extradition from France to Switzerland could be a stepping stone to other countries wanting to indict these Pink Panthers. A lighter sentence in Switzerland could be followed by a lengthy sentence elsewhere.
Staying in France to serve a medium sentence, 4-6 years, may give them protection from extradition to other countries.
A dilemma indeed !!!
Posted by Art Hostage at 6:13 pm