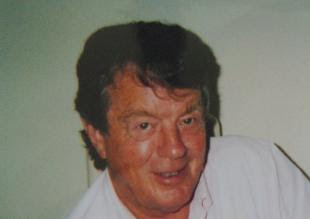 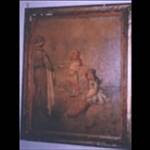 Voodoo painting "killed my husband" Brighton widow claims
http://www.theargus.co.uk/news/4665882.Voodoo_painting__killed_my_husband__Brighton_widow_claims/
The widow of a former antiques “knocker boy” said her husband had been “killed” by a voodoo painting.

Rachel Underwood said her husband Michael Underwood, who has died aged 66, will take the whereabouts of a work of art to the grave with him.

Known by friends as “Slippery Mickey" or her “limping Lovejoy” Mr Underwood gained notoriety after acquiring a William Orpen painting entitled “Girls on the Beach” from an elderly woman in the Isle of Man in 1993.

Police officers tried in vain to recover the painting but Mr Underwood always refused to say what had happened to it.

In 2006 he went to prison for six months after refusing to reveal its whereabouts.

They claimed he had used underhand means to buy the painting but Mrs Underwood said her husband never knew the value of the painting when he bought it.

She said: “I saw it just once. It was filthy and dirty, you would have paid about £5 for it at a market.

“He never told me what happened to it but swore he would never hand it over to the police and that he would rather burn it.

“To the lady’s family it was valuable but to me that picture was voodoo. It killed him.”

She added: “He always said when he died the painting would die with him and now we’ll never know.”

Mr Underwood appeared in Court on numerous occasions accused of dishonestly obtaining goods and theft. In 1993 he was sent to prison for two years after being found guilty of stealing a Berlin plaque worth £3,000 from an elderly woman in Chelsea, London.

His wife said he retired from the “knocker boy” trade in 2001 but continued to be targeted by police.

Earlier this year he appeared in court charged with concealing criminal property and perjury, the charges were dropped after Mr Underwood fell seriously ill.

Mrs Underwood, who said her husband was a true Brighton character, said: “I can’t pretend he walked a straight line, but who does?

“They called him the limping Lovejoy from the Antiques Rogueshow.

“He laughed, he didn’t care what they said about him.

“He never deserved the bad publicity.”

“He was a rogue but a lovable rogue.

“He was a lovely man and a lovely father.”

He is survived by his wife Rachel, children Claudia, Michael, Rachel and James, and seven grandchildren.

His funeral will be held on Friday.

Michael David Underwood, labeled one of most notorious Brighton Knocker Boy's, leaves this mortal coil with his place in the folk law of Brighton firmly intact.


Love him or hate him, Mickey Underwood certainly left his mark.

Art Hostage thinks this song below sums up Michael David Underwood, who as I write, has offered St Peter a Monkey for the Pearly Gates.


The words are about redemption.

Mickey Underwood was always a big money-getter, and more importantly, he would always hand over the money to Rachel, (otherwise it would go on the first Favourite) to keep his family well fed, well clothed, and well away from the Brighton Antiques Trade, that was so much a part of Mickey's life.

Throughout the 70's, 80's and 90's when Brighton Knocker boys returned to Brighton they would pass the big house on the Brangwyn estate and comment on how successful Mickey Underwood was in earning big money.

Whilst it would be easy to take cheap shots at the Ambassador, as Mickey was called, Art Hostage recognises the cultural significance of the Brighton Knockers, especially Michael David Underwood, to the history of Brighton.

The brand new Mercedes estate reg: H1 MDU was a regular feature around Brighton in the early 90's and was the envy of many Brighton Knockers and dealers.
-
Art Hostage has been contacted with the news:
-
"Olive has the Orpen"
-
And by a different source saying the Orpen is to be stashed inside Mickey's false leg and cremated with him, thus giving Mickey the last laugh.
-
Posted by Art Hostage at 5:48 pm