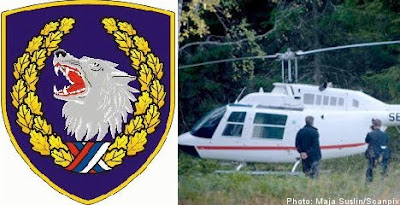 The man has an extensive criminal record and has lived in Sweden in the past, but has lived in Serbian capital for the past six years, according to Austrian news bureau APA.

Swedish police confirm that the man is of interest to their investigation.

The 40-year-old is also listed as a friend of one of the arrested suspects on the social networking website, Facebook.

According to newspaper Vecernje Novosti, Swedish investigators are set to arrive in Belgrade on Tuesday to exchange information with their Serbian colleagues.

The Serbs also warned Swedish police that members of the former special operations unit, the Red Berets, were involved in preparations for the robbery.

The Red Berets were an “anti-terrorist unit” within the Serbian-Yugoslavian police.

Their leader, Milorad Ulemek, otherwise known as Legija, has been sentenced twice to 40 years imprisonment for the murder of prime minister Zoran Djindjic in 2003, and for the murder of Yugoslavian former president Ivan Stambolic in 2000.

The Red Berets have also been accused of war crimes in Kosovo.

The group was disbanded after Djindjic's murder. Aside from those members that have been arrested, little is known of the group.

Swedish police are currently holding six suspects in Stockholm whom they believe had a role in the early morning raid on the G4S cash depot in Västeberga south of Stockholm.

In emerged on Tuesday that the youngest of the six, a 21-year-old male, was in police custody less than two weeks ago on suspicions of having robbed an armoured vehicle south of Stockholm.

The 21-year-old man has the most extensive criminal record of all the arrested suspects and is being held on suspicion of being an accessory to aggravated robbery.

The second robbery in which the man is suspected to have been involved transpired on September 18th in Kärrtorp, when a guard stopped an armoured vehicle to refill an automatic teller machine.

One of the men threatened the female guard with an axe, the other held her at gunpoint.

The pair grabbed a bag of cash and made off in a vehicle that was later abandoned and exchanged for a moped.

A short time afterwards, police arrested two men suspected of the robbery, including the 21-year-old.

Police requested to have the men remanded in custody, but the 21-year-old was released due to insufficient evidence.

“Suspicions against him remain. He was found at the scene of the crime behaving strangely,” criminal inspector Sven-Olof Karlsson told the TT news agency.

Karlsson was surprised when he discovered on Monday that the 21-year-old was one of the arrested suspects in the Västberga coup.

“I was surprised when he showed up in these circumstances, but I'll never be surprised again,” he added.

The man is well known by police in Stockholm's southern districts. His previous convictions include abuse, illegal threats, narcotics-related offences and obstruction of justice.

Police have clamped down on communication with the press and will not be releasing any new information pertaining to the investigation of the helicopter robbery.

“At the present time we are not releasing any information at all about the ongoing investigation,” said Varg Gyllander, spokesperson for the National Criminal Investigation Department (Rikskriminalpolisen).

Such a measure is highly unusual and may relate to the fact that at least ten of the suspected robbers remain at large.

There remains a significant risk that these men may tamper with important evidence, or hide themselves abroad.

The Swedish Minister of Justice Beatrice Ask has told off the Swedish Police for the amount of leaks from the investigation team - leaks that according to TV 4 news are due to competition between the national police and the police in Stockholm.

Ask says that she is surprised by the inadequate coordination between various police authorities."I do hope that none of them have got time for general gossip, and that they instead shut up and do their job," Ask told TV 4 news.

Art Hostage Comments:
-
All the while back in Belgrade, large amounts of Plum brandy are being consumed amongst the Pink Panthers, Police and Political Paymasters.
Posted by Art Hostage at 8:47 pm