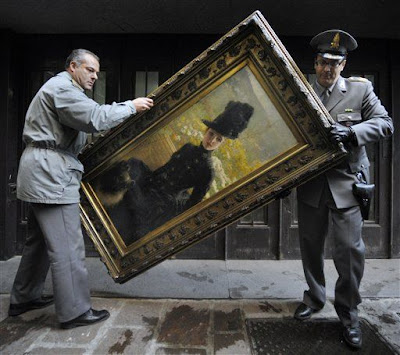 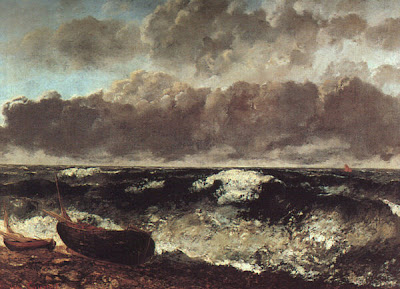 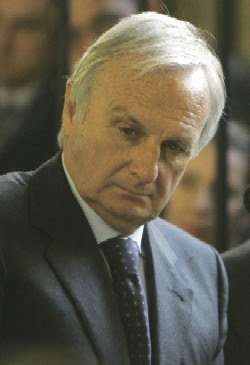 PARIS — French police detained 12 people in a sweep of a respected Paris auction house Wednesday after finding a stolen Courbet painting worth euro900,000 ($1.3 million) at an employee's house.

Police raids on the Hotel Drouot, its warehouses and homes of employees uncovered other small artworks believed to have been stolen, a police official said.

Twelve people — an auctioneer, eight commission agents and three of their family members — were detained and questioned Wednesday by investigators from the agency for fighting art trafficking. Two were later released, the official said. The official was not authorized to be publicly named because the investigation is ongoing.

The 2004 theft of the Courbet painting, "The Wave," prompted a formal judicial inquiry.

Police found it in the house of one of the commission agents, the official said. No other details, including about how and where the painting was stolen, were immediately available.

The stolen Courbet was one of several paintings by the convention-smashing, 19th-century realist master with a stormy ocean theme.

The Hotel Drouot is a large auction house in a sprawling 19th-century building in central Paris. It auctions fine art and antiquities, as well as such objects as pieces of the Eiffel Tower and mime Marcel Marceau's top hat.

Among the 19 masterpieces were paintings by some of the world's most famous artists, including Van Gogh, Picasso, Monet, Cezanne, Modigliani, Manet and Degas.

They allegedly belonged to the multi-millionaire businessman Calisto Tanzi, the founder of the Parmalat dairy empire, which collapsed in 2003 with billions of pounds of debt.

Italian courts have ruled that Tanzi bore the brunt of responsibility for the corporate catastrophe, in which many investors lost their life savings. He has been convicted of market-rigging.

Italian tax police found the artworks stashed in the basements and attics of three apartments in Parma, in northern Italy.

Mr Tanzi had reportedly told Guardia di Finanza police and tax investigators as recently as Monday, during a lengthy questioning, that he owned no such assets.

They included a portrait of a ballerina by Degas, The Cliffs at Pourville by Monet, still lifes by Gauguin and Van Gogh, a 1944 Picasso, a water colour by Cezanne and a pastel by Pizarro.

A Russian billionaire was reportedly in negotiations to buy the Monet for £9 million.

Among the other paintings, the Picasso is estimated to be worth a minimum of £6 million. Portrait of a Lady by Giuseppe De Nittis is said to worth more than £700,000.

A chief prosecutor in Parma, Gerardo Laguardia, said many of the paintings were being offered for sale, but did not specify whether they had been advertised on the open market.

If confirmed to be owned by Mr Tanzi, the art works could go some way to satisfying creditors' demands in the wake of Europe's biggest bankruptcy.

Among the hardest hit victims of the collapse, which shocked Italy's business establishment, were the thousands of ordinary Italians who were convinced that buying bonds in the company was a safe investment.

The food giant collapsed shortly afterwards with a 14 billion euro hole in its accounts.

Parmalat emerged from bankruptcy in 2005, after being stripped of its loss-making foreign units, and has refocused on its core dairy business.

ROME — Italian tax police said Saturday that they had seized works by Van Gogh, Picasso, Cezanne and other giants of art in a crackdown on assets hidden by the disgraced founder of the collapsed dairy company Parmalat.

Authorities estimated the 19 masterpieces stashed away in attics and basements were valued at some euro100 million ($150 million).

Parma Prosecutor Gerardo Laguardia said that, based on wiretapped phone conversations, officials believed at least one of the paintings hidden by Calisto Tanzi was about to be sold.

"We got lucky. We learned that there were negotiations under way to sell one of the paintings" and raid three apartments in the area of Parma, near Parmalat's headquarters, Laguardia said in an interview on Italy's Sky TG24 TV. He didn't identify the painting.

Bologna-based tax Police Col. Piero Iovino told The Associated Press by telephone that investigators believed the entire batch of paintings, watercolors and drawings were up to be sold. The prospective buyer was a Russian, possibly living in Italy, Iovino said.

No arrests were announced as part of the art seizure.

Parmalat, the dairy conglomerate known for its long shelf-life milk grew from a small dairy distributor in Parma, into a diversified, multinational food company by 1990, but collapsed in 2003 under euro14 billion in debt — eight times what it had previously acknowledged — in what remains Europe's largest corporate bankruptcy. Many small investors who lost their life savings were among some 40,000 defrauded bondholders.

Italian courts have already ruled that Tanzi bore the brunt of responsibility for the collapse. Tanzi was convicted by a Milan court last year of market-rigging and other charges in one of multiple probes. He is currently on trial for alleged fraudulent bankruptcy.

Tanzi has blamed the banks for the labyrinth of deals that helped swell the company to a global empire with operations in more than 30 countries, but also led to the company's collapse.

For years after the collapse, Tanzi was rumored to have had a "hidden treasure" somewhere. On Nov. 29, a state TV show alleged that Tanzi had hidden a collection of artwork to try to shelter himself from the effects of looming collapse of Parmalat.

"I don't have any secret cache" of paintings, Tanzi told reporters the next day on the sidelines of his current trial in Parma, repeating his ongoing dismissal of reports that he had a so-called "little treasure" of assets squirreled away.

A lawyer who represents Tanzi and serves as his spokesman didn't answer his cell phone Saturday.

Police showed some of the paintings to journalists near Parmalat's headquarters Saturday.

After the TV show, "we tightened the screws" and zeroed in on Tanzi son-in-law Stefano Strini, Iovino said. "He told us that the paintings were Tanzi's" and led police to the apartments, he said.

As the corporate failure loomed, Tanzi moved to safeguard his wealth by hiding "property whose value endures through time," Iovino said.

Among the masterpieces was a pencil on paper portrait of a ballerina by Degas, two Van Goghs, including a depiction of a trunk of a willow tree and a still life, a watercolor by Cezanne and a pencil-work by Modigliani.

Tax police official Massimo said some of the paintings were carefully wrapped for protection, but that other paintings, including a Picasso, were left open in the store room.
Posted by Art Hostage at 6:49 pm