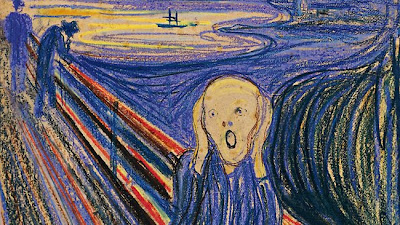 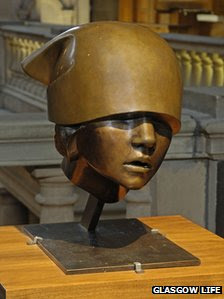 A bronze sculpture worth £20,000 has been stolen from Kelvingrove Museum in Glasgow.

Dreaming, by Gerald Laing, disappeared on Sunday afternoon. It was last seen by museum staff at 15:45.

Strathclyde Police have started to examine CCTV images from a number of areas within the museum.

Management said it was the first time a piece had been stolen since the building reopened in 2006 after a major refurbishment.

A spokesman for Glasgow Life, which manages the city museums, said: "This was a deliberate act.

"Someone has stolen from the people of Glasgow. As with all of our collections, this work belongs to them.

"We are working with the police and other agencies and would appeal for the safe return of this work of art."

He said there had been more than nine million visitors to Kelvingrove since it reopened, with no previous incidents of work being taken from public view.

"Thanks to the quick action of staff, we have been able to identify a short timeframe where we believe the bronze was stolen and are in the process of examining CCTV footage from across the museum to identify those responsible," he added.

Artist Laing was born in Newcastle-upon-Tyne and lived on the Black Isle, near Inverness.

Laing spent much of the 1960s working in pop art in New York and was a close friend of artists Andy Warhol and Roy Lichtenstein.

His most famous works included images of actresses Brigitte Bardot and Anna Karina.

Police have recovered a bronze sculpture valued at £20,000 which had been stolen from Glasgow's Kelvingrove Museum.

Dreaming, by Gerald Laing, disappeared from the museum on Sunday afternoon.

It was found by officers following an anonymous tip-off from a member of the public.

A spokesman for Strathclyde Police said the statue did not appear to have been damaged, and inquiries were continuing into who was responsible for taking it.

Staff at the museum said earlier this week that it was the first time any piece had been stolen from the building since it reopened in 2006 following a major refurbishment.

Auction of a Scream heard across the world

SHORT of putting the Mona Lisa up for sale, Sotheby's could hardly be dangling a more enticing trophy in front of today's billionaire art buyers. The auction house announced on Tuesday that it will sell Edvard Munch's The Scream in New York on May 2 -- the first time that an original version of what the auction house called "the defining image of modernity" has been available to buy.

It is all but certain to spark the sort of competition that auctioneers fantasise about, albeit one restricted to the "10 or 12" people prepared to do business at that level, Sotheby's says. With three months to build momentum, the auction house is optimistic of achieving a remarkable price for the only one of four Munch Screams in private hands.

The highest figure it would put on the pastel work this week was $US80 million ($75m) but Philip Hook, a Sotheby's director and international senior specialist in impressionist and modern art, acknowledged the company was looking at reference points much higher than that.

"It's very difficult to predict what this will make," he says. "One has to look at the highest auction price that we have achieved, which is the $US104m for the Giacometti Walking Man sculpture (in 2010). Then there's the price paid privately by the Qatar Royal Family for the Cezanne Card Players of $US250m last year."

Fame, rarity and what the trade calls "wall power" are all important drivers of price at the top end of the art market and The Scream ticks all three boxes.

It melds the visual influence of the impressionists and post-impressionists that Munch absorbed when he went to study in Paris in 1889 with the dark, troubled mood of his Scandinavian contemporaries Ibsen and Strindberg.

Popularised in the artist's lifetime thanks to the lithograph he made of it, The Scream has a pop-cultural reach that goes far beyond art history circles as seen by its appearances in The Simpsons, and the Scream series of horror films.

The $US80m prediction is therefore a sensible one, Hook says, "but we have seen before how things at auction can take off". The picture is already in Sotheby's care and will be displayed in London and New York, and possibly China, Russia and the Middle East.

It belongs to the Norwegian businessman Petter Olsen, whose father Thomas was a friend, neighbour and patron of Munch. Olsen says that proceeds from the sale will go towards building a new Munch museum, art centre and hotel at his farm in Norway.

The picture for auction is one of four surviving versions of the image that Munch made.

The prime example, worked in 1893 from tempera and crayon on board, is in the National Gallery of Norway. The Munch Museum in Oslo has another two dating from 1893 and 1910.

In 1994, the National Gallery of Norway's 1893 version was stolen at the start of the Olympic Winter Games in Lillehammer, Norway. It was recovered later that year, unharmed. In 2004, masked gunmen stole the Munch Museum's 1910 version of The Scream. It was recovered two years later.

Olsen's version, created in 1895, is the one that most closely follows the prime composition in the National Gallery.

It is also the most colourful of the four, and the only version whose frame was hand-painted by the artist to include a poem on the work's inspiration.

Munch wrote: "I was walking along the road with two Friends / the Sun was setting -- The Sky turned a bloody red / And I felt a whiff of Melancholy -- I stood / Still, deathly tired -- over the blue-black / Fjord and City hung Blood and Tongues of Fire / My Friends walked on -- I remained behind / -- shivering with Anxiety -- I felt the great Scream in Nature -- EM".