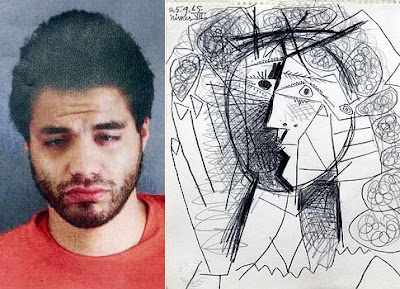 Man gets prison for NY part of art-theft spree

NEW YORK (AP) — A wine steward who served time in California after going on a bicoastal binge of plucking pricey art off gallery walls and using it to adorn his own home was sentenced Tuesday to prison in New York.

Mark Lugo said simply, "I'm sorry," as a judge sentenced him to one to three years behind bars in New York, though he could be released in six months if he succeeds in a boot camp-style program.

Lugo, 31, previously pleaded guilty to taking a $350,000 drawing by Cubist painter Fernand Leger from a lobby gallery at Manhattan's Carlyle Hotel in June. In the California case, he also admitted to snatching a $275,000 Picasso drawing called "Tete de Femme" ("Head of a Woman") from the Weinstein Gallery in San Francisco in July.

He finished a 138-day California sentence in November, and was brought to New York to face charges that also included stealing five works by the South Korea-born artist Mie Yim from another Manhattan hotel in June. While he admitted specifically to the charge involving the Leger, the guilty plea was accepted as resolving the charges related to the works by Yim, who's known for her disconcerting images of toy bears and other creatures.

Investigators found a $430,000 collection of stolen art — including the Leger, a 1917 piece called "Composition with Mechanical Elements" — hanging in Lugo's apartment in Hoboken, N.J., authorities said.

"In an effort to display stolen art in his apartment, this repeat art thief boldly walked out of two Manhattan hotels in broad daylight" with valuable works in canvas tote bags, Manhattan District Attorney Cyrus R. Vance Jr. said in a statement when Lugo was arraigned.

Lugo's lawyer, James Montgomery, noted Tuesday that Lugo had "no commercial motive" in the thefts.

"His interest in these things was aesthetic," Montgomery said.

While most art thieves aim to sell what they take, a few have stolen to flesh out their own collections, said Robert K. Wittman, an art-security consultant and former investigator for the FBI's national art crime team.

Lugo, a sometime sommelier and kitchen server at upscale Manhattan restaurants, also is charged in New Jersey with taking three bottles of Chateau Petrus Pomerol — together worth $6,000 — from a Wayne wine shop in April. That case is pending.