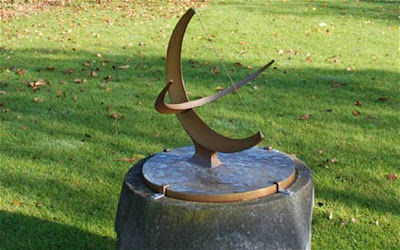 Liam Hughes, 22, and Jason Parker, 19, accused of taking artwork, worth up to £500,00, from artist's former home in Hertforshire

Two men have been charged with the theft of a sculpture taken from the former home of British artist Henry Moore.

Hertfordshire police said Liam Hughes, 22, and 19-year-old Jason Parker had both been charged with stealing the sundial sculpture and a bronze plinth.

The sundial, created by Moore in 1965 as a working model for a larger sculpture, was taken from the grounds of the Henry Moore Foundation in Much Hadham, Hertfordshire, overnight between 10 and 11 July.

Said to be worth up to £500,000, the distinctive artwork was found at an undisclosed location after a televised appeal for information last Thursday.

Hughes and Parker, both of Coltsfield, Stansted, Essex, have been bailed to appear before magistrates in Stevenage on 3 August. A third man, aged 22 and also from Stansted, has been released without charge
Posted by Art Hostage at 9:12 pm