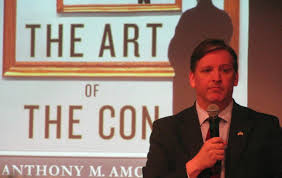 Anthony Amore, for the last two years has been writing a book about Rose Dugdale and the IRA Vermeer theft to give himself cover in finally trying to flush out any Irish Republican influence in recovering the Gardner art.

Anthony has tried, in vain thus far, to convince people of the current reward offer and immunity offer being collectable, therefore negociations are at an impass.

The suggestion of the Gardner Art Reward Price List would go some way to establish the sincerity of the Gardner Museum and be an olive branch to those would could help recover some Gardner art.

Those who hold or control some of the Gardner art fear the clenched fist of the FBI will come crashing down on their houses with God's own thunder if they step forward.

A test balloon of a lesser valued Gardner artwork being handed back would also give confidence to follow through with the future recoveries of the Vermeer and Rembrandts.

Much more will be revealed in the months ahead as we move towards the thirty years since the Gardner Art Heist March 1990- March 2020.

Whomever holds any Gardner art must be terrified of stepping forward, so reassurances should be given by the FBI and Gardner Museum, such as a Gardner Art Reward Price List, to cover the distinct possibility the thirteen Gardner artworks are not held together anymore.

Sadly, the assurances of Anthony Amore have rung hollow to those who can facilitate the recovery of some Gardner Art.