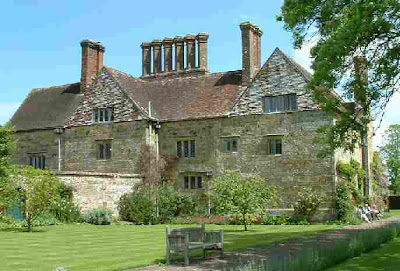 Two Tiffany lamps worth tens of thousands of pounds have been stolen from a former home of Rudyard Kipling.
Bateman's, a 17th Century Jacobean property run by the National Trust, was hit by burglars in the early hours.

Police in East Sussex said the two lamps could have been stolen to order. Nothing else was taken in the break-in.

A National Trust spokesman said Kipling bought the lamps in the 1890s. "It's because of their association with him that they're valuable to us," he said. 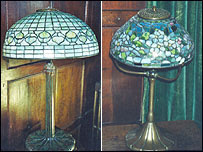 A burglar alarm linked to a security centre was activated at the property, in Burwash, near Heathfield, at about 0200 BST on Saturday.

Police said entry had been gained through a downstairs window.

Det Insp Paul Phelps said: "One of our lines of inquiry is that the lamps were specifically targeted, but it could also be that the offenders grabbed what they could when the alarms sounded.

"We would appeal to people within the antiquities market to be aware that these lamps have been stolen."

Bateman's was closed to the public on Saturday morning while forensic examinations were carried out.

Jonathan Light, from the National Trust, said the 12 to 18in-tall (30-45cm) lamps had been on separate tables in a parlour room.

"It's obviously upsetting because these items are there for the public to enjoy, so it robs them as much as anything," he said.

The building was not covered by CCTV cameras, but Mr Light said there would have been security staff on site when the burglary happened.

A lamp similar to one of those stolen has an auction guide price of at least £5,000 on the Bonhams website.

Burglars net £10,000 in antiques
By Will Mcmanus


ANTIQUES worth £10,000 were stolen from a house in Broughton during a burglary on Friday night.

Three men dressed in dark clothing got into the home at about 10pm by forcing open a set of patio doors. They took a number of items from a downstairs room before they were disturbed by the owner.

Police are appealing for anyone who may have seen someone acting suspiciously in the village around the time or has any information to get in contact.

They are also keen to speak to anyone who may have been offered antique or high value items for sale and are at all suspicious.

z Meanwhile in a separate raid three men made off with a substantial amount of cash after entering the Grateley home of a 67-year-old man on Monday between 6.30pm and 7pm.

The men, all white, fled after being disturbed by the owner.

They were possibly using a white vehicle.

Police are appealing for witnesses or anyone who may have been in the Grateley area and seen the men to call them on 0845 0454545.


Art Hostage comments:
I expect another bogus reward to be offered and then these cases will join the thousands of others filed under "unsolved"
Time to focus on prevention and targeting of those who indulge in Art related crime.
Is it me, or has there been a cluster of high value art thefts recently??
Perhaps it is because there is no desire to investigate art theft, other than a few headlines immediately after the crime.
Even if caught and convicted, criminals can expect a slap on the wrists, rather than the long sentences handed out for equal monetary crime involving drugs, and other types of contraband.
Art crime has evolved into a high profit, low risk criminal enterprise, not just reserved for the traditional art thieves, but now attracting criminals from other sections of the criminal underworld.
Posted by Art Hostage at 1:42 pm