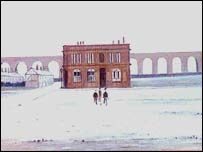 A £70,000 reward has been offered in the hunt for two valuable LS Lowry paintings stolen by an armed gang.
The Viaduct and Tanker Entering The Tyne were among five works taken during a raid at an art collector's home in Cheadle Hulme, Stockport, last month.

Three men, armed with knives, tied up Ivan Aird and threatened his wife and two-year-old daughter.

Police said the community was outraged by their ordeal and hoped the reward would yield new information.

The five artworks, valued at more than £1.5m in total, and Lowry's palette and brushes were taken on the morning of 3 May.

Louise Aird, 40, let the gang in to the house at Brackenwood Drive thinking it was a post delivery.

Police said that the men threatened Mrs Aird and her daughter Sabrina, who she was holding at the time.

Det Supt Tony Cook, of Greater Manchester Police, said: "People have been outraged that these criminals were not only able to go into Ivan and Louise's home, but also threaten them and their daughter.

"The stolen paintings are not only extremely valuable but also hold a great deal of sentimental value for Mr Aird, as Mr Lowry was a close family friend."

Mr Cook said the paintings were also a major part of the heritage of the region and would be almost impossible to sell.

Walk softly and carry a big stick, you will go far

If you are going to offer a reward, bogus and noncollectable as all rewards are these days, then offer a big reward to try and smoke information out..

Might as well offer £7 million rather than £70,000 as the 2002 Proceeds of crime act forbids the payment of rewards in any case.
Lets play this thing out:
A person with vital information on this terrible robbery contacts Police.
(1) They have to be registered as an Informant with the Police.
(2) Their information leads to the recovery of the Lowry's and arrests of those in possession.
There will be at least a wait of about a year before this would get to court.
In the meantime the Informant would receive nothing and be expected to act for Police as an informant in the meantime.
(3) Those arrested and charged will have some clue to who gave the information, it may be narrowed down to a few people who knew.
(4) Those arrested and charged then issue Witness summons to all they think were the informant and let it be known that when they are in the Witness box, under oath they will be asked by Defending Council:
"Are you the informant in this case?"
Those who are innocent will say truthfully, No, but the informant will look to the Judge for guidance, this in itself will expose the real informant.
In days of old this tactic was employed by criminals to pressure Police to drop charges in order to protect their Informant.
I bet today the Police would allow their informant to be exposed if it meant they would get a conviction.
The informant would then only receive a payment deemed suitable by the insurers, who are so fucking cheap £1,000 is about the limit, regardless of what was offered in the media.
The insurers are trained to come up with some story, damage, lower value or some bollocks to only make a small token payment, and this after about two years from the recovery.
As this was a violent robbery I am sure those who have information are well aware they would be ruining their life if they pass their knowledge to Police.
very, very Sad but true. 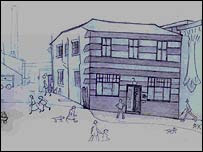