Stolen Art Watch, Rare Valuable Prints, Why Pay Retail When You Can Buy From Your Drug Dealer ?? 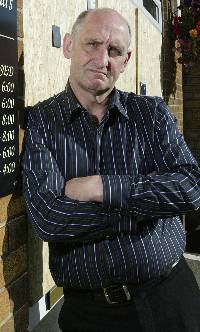 
By Suzanne Rutter
THOUSANDS of pounds worth of rare prints have been stolen in an early-morning raid on an art gallery.

Tony Satloka was woken by police on Sunday morning after the robbery at his Satloka Gallery, Wade House Road, Shelf, at 5.15am.

Four hooded youths are believed to have smashed the store's windows with bricks and made off with £3,000 worth of limited-edition prints.
The images included four by Brazillian-born artist Henderson Cisz, El Chal, or The Shawl, by Fletcher Sibthorp and two by David Farren.

They included a copy of Cisz's 70-inch by 30-inch Chrysler View, one of only 195 nationally.

Gallery owner Mr Satloka, 57, said: "I could understand someone stealing a Monet and keeping it rolled up in a vault all their lives. But limited-edition prints are very difficult to sell. If someone tries to sell these on e-Bay they will shoot themselves in the foot.

"Stealing a painting is not the same as stealing a television. It's sad that people can destroy what others value and treasure." Mr Satloka said he was reluctant to put bars across the windows of his shop.


"The store is now boarded up. But I'm in the business of selling imagery – 90 per cent of my customers come to the gallery because of the window displays. Bars would ruin that."

The youths were prevented from taking more of the store's stock by the landlord of nearby The Duke of Wellington pub.

Hand-crafted glass by international glass manufacturers Svaja and Kinky Glass, worth about £4,000, was broken in the raid.

Mr Satloka, also an artist, said it would cost thousands of pounds to replace the windows. He has owned the gallery for 18 months and sells work by local and international artists.

A police spokesman said: "Some youths were seen running off with pieces of art towards Lightcliffe roundabout.

"Anyone who is offered any artwork, and is suspicious about where it came from, should contact us." 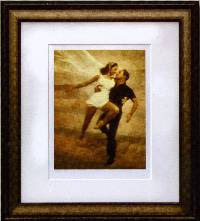 Stolen rare prints adorn walls of rich drug taker who buys drugs from same drug dealer as original print thieves.
Rare prints remain on the wall of rich drug taker, who has a good job, not involved with any other type of crime, therefore less likely to be raided by Police and caught.
Recovery rate of stolen art 5%-8%
Art theft, now firmly in the mainstream !!