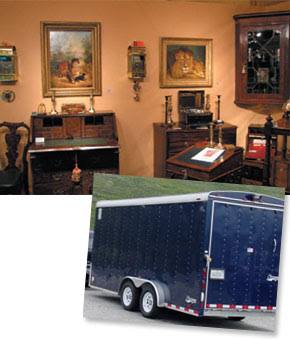 Dealer sues after theft of antiques from lorry


AN antiques dealer is suing her removals firm and insurance company for more than £300,000 after furs, jewellery and antiques were stolen from a lorry.

Maria Roth moved from Fulbourn to Stratford-upon-Avon in Warwickshire in 2004 and negotiated with Segrave Removals of Fulbourn to collect her goods on a Friday, store them over the weekend and deliver them to a flat in Stratford on the Monday.

But disaster struck when the lorry containing her possessions was stolen from the company's storage yard in Fulbourn. It was later found burned out in a lay-by in Lincolnshire with a few of her goods remaining - but these were burned or otherwise damaged.

Now Ms Roth, formerly of High Street, Fulbourn, has issued a writ for damages totalling more than £300,000 in the High Court.

Ms Roth contacted Segrave Removals on March 2, 2004, and was told the company would be able to pick up the goods on March 11 and 12, store them over the weekend in a fully alarmed and secure store and deliver them to Stratford on March 14.

Her possessions were duly collected from her home and nearby shop and put in three containers on a lorry which was then stolen over the weekend.

Police managed to recover some of her possessions but many of those were damaged and the value or cost of repair totals £52,008.

If Police acted in a pro-active manner towards Art and Antiques theft they may recovered some of the stolen Antiques and Jewellery from this lorry.

Police would then be in a position to declare whether the loser was involved or how the theft occurred.

The Insurance company would then be forced to make payment.

Unfortunately Police do not afford Art and Antiques theft priority and will not allow the private sector to investigate properly.

This leaves the shadow of suspicion cast upon Maria Roth and gives the insurance company a reason not to pay out.

I am wondering why jewellery, furs and small valuable items was included in this load and not taken by Maria Roth as hand luggage for its personal protection?

Burning out stolen lorry loads is not that common and is either a case of professionalism by the thieves or to confuse Police as to what was stolen, thereby making the sale of the stolen antiques easier.

Police could have used this to their advantage by claiming the whole load of antiques, furs and jewellery was lost, thus smoking out the stolen items into the legitimate antiques market.

I bet if Police were to look hard enough they would find some of these stolen items, sadly however, they would had been sold many times over by now.
Sorry to keep blaming the Traveller community for some art thefts but I am told of a link between Travellers in the Cotswolds and Travellers in Lincolnshire/Newark.
Whilst some in the Travelling community do engage in art related crime, there is a whole plethora of art criminals nationwide, controlled from Brighton, Sussex, (as the major clearing house), that engage in organised art crime.
Because of the favourable reward for risk when committing art crime, it has become somewhat the crime of choice for a whole new breed of otherwise petty thieves.
Posted by Art Hostage at 2:43 pm