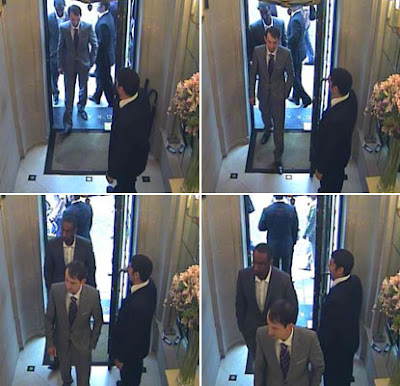 The two men who carried out the £40 million Mayfair jewellery robbery hired a make-up artist to give them latex disguises, it was revealed today.

The professional artist thought he was preparing them for a pop video as he covered their faces with liquid latex at his Covent Garden studio.

But within hours the men changed into suits, walked into Graff Diamonds in New Bond Street and held staff at gunpoint after bluffing their way through the “airlock” security door.

The 29-year-old artist, who is now under police protection, was asked to make the two men look older. Using techniques featured in films such as the Mission: Impossible series he also tinted their hair and darkened their skin tone in a four-hour session.

Experts believe the exquisite stones, including a yellow diamond flower necklace were smuggled out of the country within hours of the robbery.

Jeweller Nick Fitch of Hatton Garden said: “They were undoubtedly after the gems themselves but they are so distinctive they will have to re-polish them to give them a new identity. They will be lucky to get 20 per cent of their retail value — around £8 million.”

The freelance make-up artist received £450 in cash for the session which lasted from 11am to 3pm. The pair changed from T-shirts and shorts into suits and are believed to have gone straight to Graff's store in New Bond Street which they entered at 4.40pm.

A friend of the artist told the Sun: “He thought they hired him because they were starring in a music video, not the biggest jewellery robbery in history.

“They asked him to make them look older. He used special latex material to change the way they looked and was really pleased with the result.

“The studio does lots of work for films, TV and the West End but these two chaps didn't appear at all theatrical. He said they were arrogant and cool and not at all chatty.”

Detectives have removed hairbrushes and gowns from the make-up studio to gather DNA clues to the identity of the men — one white, one black. Banknotes used to pay are also being examined. Artists from the same studio also unwittingly provided disguises for a gang which carried out the £53 million cash raid on the Securitas depot in Tonbridge in Kent in 2006.

Several members of the public have called police with names for the smartly-dressed Mayfair raiders after a CCTV appeal.

A 50-year-old man was arrested in Ilford in connection with the robbery and police have raided several addresses in London and the South-East. The arrested man has been released on bail.

It emerged today that a Graff security guard challenged the men as they took a woman employee hostage. He ran to confront them as they led her down the street. When they turned and fired a shot he was able to grab the woman.

A witness said: “They had a gun in her back. The gunman turned and fired. God knows how he missed, but it allowed the security guard to save the girl.”

It is understood the two robbers had made an appointment to visit the store, which was how they were allowed through the airlock door.

Police say there were at least three getaway vehicles and a motorbike parked nearby.

A BAG containing gems worth £1million was stolen from an absent-minded jewellery rep as he browsed through books in an Oxfam shop.

The 62-year-old, from a firm in London's Hatton Garden, was taking a break from selling to stores in Perth, Scotland. It is thought Eastern European gangsters had been tracking him for weeks.
-
Graff Update:
-
Police have revealed they found a loaded gun in one of the cars used to make good the thieves escape, BMW.
-
However, it is not one of the guns used in the actual raid.
-
Indications are the Graff diamond raid is like the current British marijuana trade, "Home Grown" with roots in a Modus Vivendi !!
Posted by Art Hostage at 1:02 pm