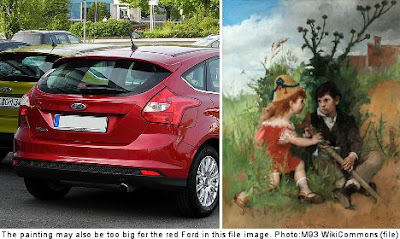 Art thieves in Stockholm escaped police but left their loot behind after a brazen burglary left a man in his sixties without his multi-million kronor paintings.

Two men gained entry to a man’s house in Bromma, a suburb in northern Stockholm, by forcing their way into the house, wrote the Aftonbladet newspaper.

They then bound the homeowner’s hands, threatened him with a knife, and took three paintings before making their getaway.

However, witnesses explained how the paintings were simply too big for the men’s getaway vehicle – a red Ford.

“I was standing ten metres from where they ran out. They tried to get the painting in the car, but it was too big. They threw it aside when we came,” said one witness to Aftonbladet.

The witness also said that reckless driving by the burglars meant they almost ran over the dumped painting.

The two other pieces were later found by police in a nearby dumpster. All three were painted by famous Swedish artists, according to the paper.

Police launched a large hunt for the offenders, but have so far been unsuccessful, however, the incident was not the first time the resident had dealt with strangers interested in his house.

According to the paper, the man had left an ominous note posted on the building’s door for other residents the day before, which read “Attention: Someone rang me asking for the code to the front door – beware of burglars”.

While the victim of the robbery was not injured in the attacks, police have stated that he is still feeling shaken by the incident.

“He doesn’t feel well, but did not need to be taken to hospital,” said Björn Knutsson of the Västerort police to the TT news agency.

Some evidence has been obtained by police who have labelled the crime as aggravated theft, wrote TT.

The case has since been turned over to an specialised investigative team and forensics are busy looking for leads on the crime scene.