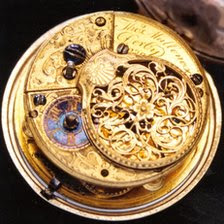 Coins, medals and watches with an estimated value of £53,000 have been stolen from Derby's museum service.

The artefacts were taken from a city storage depot between 2 May and 19 June but the theft only came to light when another museum asked to borrow an item.

Coins dating back more than 800 years were also taken as well as 19th Century football medals.

A rare collection of 17th Century trade tokens were also taken along with medals from the 1888 Derbyshire Football Cup.

Derbyshire Police, which is investigating alongside the Metropolitan Police Arts Crime Unit, said it was keeping an open mind about the theft.

Det Con Dee Hornblower said: "There has been no sign of a break in at the premises so the possibility that this was carried out with inside knowledge has at this stage not been ruled out.

"We have circulated details of the stolen items to every police force in the county in the hope that they can be traced."

Security at the storage facility, in an undisclosed location, has been stepped up.

Martin Repton, Derby City Council's member for Leisure and Culture, said: "The issue here is not just about the values of the stolen items but also the historical importance of many of the pieces.

"Our ultimate fear is that some of these items could potentially be discarded by the culprit or culprits meaning they would be lost forever."