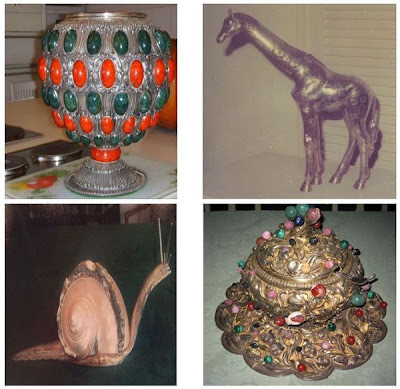 In a scene reminiscent of "The Pink Panther," the cat

burglar sneaked in through a second-floor bathroom window and pounced on the snail and the giraffe.

The silver animals were part of an art collection of many shiny sculptures — possibly valued at more than a half-million dollars.

This is no make-believe case starring Chief Inspector Clouseau.

The burglary is being investigated by Miami Beach police, who are seeking the public's help for clues. A reward of up to $25,000 is being offered by the victim and a security firm for the recovery of the antiques.

Thursday, authorities released photographs of the collectibles stolen in early May from Jean Boulton's pink house on the exclusive La Gorce Island. The heirlooms were gifts from Boulton's husband, Andres Boulton, a millionaire industrialist who died in 1998.

"She got them from her husband, and she's had them for many years," said Robert Wittman, 56, a retired FBI agent serving as a consultant on the case. "They mean a lot to her beyond the monetary value."

The day of the heist, a thief broke a second-floor window to enter Boulton's home. Stolen were two animal-shaped items: A silver giraffe as well as a nautilus shell wrapped with silver adornment. Also purloined were a bowl and soup tureen, each lined with jewel stones and made by Buccellati, a jewelry company.

Andres Boulton and his family ran companies that included shipping, cement, tile, iron mining and steel, according a 1998 article from The Miami Herald. Andres and Jean Boulton, married for 25 years, were avid travelers and one of their many homes was in Miami Beach. In 1993, Jean Boulton reportedly had $1 million in jewels stolen from her atJohn F. Kennedy International Airport in New York.

Today, she typically has a full-time staff of eight or nine when living in South Florida. But she was away in Venezuela during the theft in May, causing her staff to be "relieved of the 24-hour-type duties," a police report said.

Detectives must consider all possibilities, so they haven't ruled out Boulton's staff as suspects, said Detective Vivian Hernandez, spokeswoman for Miami Beach police. "You have to explore those avenues," Hernandez said. "Staff do get questioned."

The thief may have a tough time selling the antiques, Wittman said. "These pieces are so unique they're going to be very difficult to move on an open market," he said. "Anyone who sees these, they're going to recognize them right away."

Though the theft of high-value artwork is uncommon in Miami Beach, it does happen with so many rich residents living there, authorities say. There are "affluent residents who have collections," so burglars sometimes "get certain items at those types of prices," Hernandez said.

Wittman, who runs Robert Wittman Inc., a Philadelphia-based security consulting firm, said art thefts have kept him busy across the country. "At any given time I'm probably working 40 of these things," he said. "The criminals watch TV, too. They have an idea of what things are worth, and that's why they're going after them."

MIAMI BEACH, Fla. (WSVN) -- A ritzy rip-off at a Miami Beach home has inspired the victim to offer a huge reward.

Police released photos of the four antique sculptures stolen from a Miami Beach home in May. The pieces of art, which include some precious stones, were valued at nearly $500,000.

A $25,000 reward has been offered for any information leading to a recovery of the sculptures.

If you have any information on the whereabouts of these items, call Miami-Dade Crime Stoppers at 305-471-TIPS. Remember, you can always remain anonymous, and you may be eligible for a reward.