Stolen Art Watch, Guests, like fish, begin to smell after three days. By failing to prepare, you are preparing to fail. 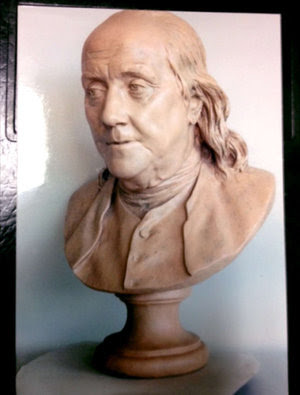 For a brief period this summer, Andrea Lawton worked on the housekeeping staff of their home, according to a Bryn Mawr couple. Now, say Lower Merion police, she is suspected of cleaning them out of a rare bust of Benjamin Franklin said to be worth more than $3 million.

Lawton, 46, of Philadelphia, learned her employers' routine during her month working at their residence on the 600 block of Black Rock Road, according to homeowner George A. D'Angelo.

Police responded to a call by the household staff, which reported the burglary about 12:30 p.m. Friday, while he and his wife, Brenda, were not home, D'Angelo said. But the porcelain bust and a small, framed portrait were already gone, he said.

The bust is 28 inches tall and weighs 25 pounds, including its brass supporting structure, D'Angelo said. Made by Jean-Antoine Houdon in 1778, while Franklin was visiting Paris, the bust is one of four in existence, he said.

"It sat on the pedestal and just dominated the drawing room," D'Angelo said.

The three other busts are at the Philadelphia Museum of Art, the Metropolitan Museum of Art in New York, and the Louvre in Paris, according to D'Angelo. The Louvre version is made of terra cotta; the two others are marble.

When the marble bust was donated to the Philadelphia Museum of Art, it was valued at about $3 million, said D'Angelo, who believes the stolen work is worth at least as much.

It is unique, he said, because Franklin's expression seems to vary from different angles. The work is part of a collection of historical objects his family has collected, D'Angelo said.

Lawton and another woman were seen leaving the house Friday by a staff member, D'Angelo said. But because both had been recent employees there, their presence did not raise suspicion, he said.

The residence's housekeeper soon realized that the artwork was missing.

"It was a great shock," said D'Angelo, who reported that the intruder or intruders entered through a sun-porch window.

Township spokesman Thomas Walsh said Lower Merion police were working with Philadelphia authorities on the case. It was not known Saturday whether police were searching for a second suspect.

D'Angelo said he was considering offering a reward as an incentive for the safe recovery of the historic Franklin bust.

"I just hope it's returned," he said. "It's our history - American history."

THIEVES got away with £7,000 worth of antiques when they raided Prideaux Place in Padstow last weekend.

Detectives say the burglary happened in the early hours of last Saturday morning at the home of Peter and Elizabeth Prideaux-Brune.

Bodmin CID are also investigating a burglary at Pencarrow House between Bodmin and Wadebridge that could be connected.

Elizabeth Prideaux-Brune said all the items stolen were of great sentimental value.

"The music box that was taken was a present from my husband on our first wedding anniversary, and the candlesticks and a rose bowl were presents from Prince Chula Chakrabongse of Thailand and his wife, Princess Chula, when they lived at Tredethy,'' she said.

"The antiques were all incredibly special to us, not only sentimentally but historically too.''

Detective Constable Sarah Northcott said 13 items were known to have been stolen from Prideaux Place.

She said: "The alarm was activated at 2.15am on August 18 when the offender or offenders gained entry by forcing a ground floor library window. They removed items from the library and then the dining room."

Items stolen were: A 19th-century skeleton clock 9 inches tall; A mahogany mantle clock 14in tall inscribed on clock face with Squire and Son, Bideford; A silver salver 22in in diameter with the Prideaux Brune coat of arms in the centre; two silver cigarette boxes - one 7in square the other 7in long and both inscribed with Prideaux coat of arms; a silver rose bowl 10in in diameter inscribed inside the bowl in Thai writing and is highly decorated; a silver candle snuffer 9in long with a wooden handle; two silver soldier figures 9in high both dressed in armour one carrying a lance; a silver wine coaster; a music box with a clock on one side and a small bird that comes out of the top, manufactured by Halycon Days; a silver pheasant figurine; two Corinthian candlesticks 10in high; a silver owl and a pepper and salt pots with a grouse design.

Detectives say earlier in the month there was a burglary at Pencarrow House when thieves smashed a rear first floor window to gain entry on August 4. A silver tray and two antique pieces of china were stolen.