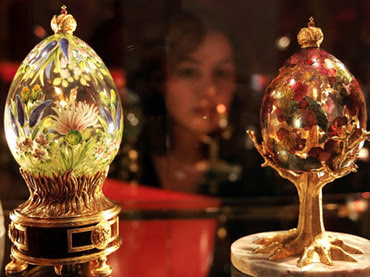 A painting by famed Russian seascape artist Aivazovksy, and two genuine Faberge eggs have been stolen from a private collector in St. Petersburg.

­The apartment of Vladimir Mukhin, 57, was robbed between September 8 and 10. The criminals escaped with several millions roubles in foreign currency, jewelry, several paintings and two Faberge eggs, decorated with gold and precious stones.

Police are now trying to estimate the exact sum of the collector’s loss.

Painter Ivan Aivazovsky is highly acclaimed and earlier this year his 1856 work ‘View of Constantinople and the Bosphorus’ has sold for record $5.2 million at Sotheby’s.

The Faberge eggs are also a rarity as the jeweler only produced them between 1885 and 1917. The most expensive egg was presented in 1913, and would have cost around $3 million today.