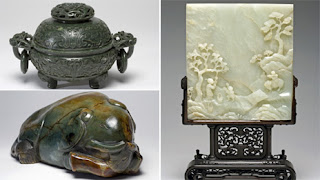 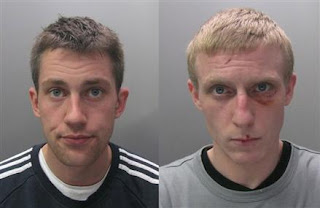 The gang who stole up to £15 million worth of Chinese artefacts from the Fitzwilliam Museum has been put behind bars for a total of more than 18 years.
Marvin Simos, of Victoria Dock, London, who was 15 at the time of the raid, was given a four-month detention and training order for breaking into the Cambridge University museum and stealing 18 irreplaceable jade works of art.
Steven Coughlan, 25, of Eleanor Street, London, Robert Smith, 24, Rosedale Stables, Swanley, Kent, and a 29-year-old from London, who cannot be named for legal reasons, were each jailed for six years after pleading guilty to conspiracy to burgle at a previous hearing.
None of the valuable art, which has been valued between £5 million and £15 million has been recovered despite worldwide police forces being alerted.

The gang smashed their way into the Fitzwilliam Museum on Friday, April 13, and stole 18 valuable Chinese artefacts. CCTV checks identified four people heading towards the rear of the museum shortly before the burglary at around 7.30pm.
Four people were then seen carrying bags from the museum before heading off in a stolen van. The van had been stolen on Saturday, April 7, at 8.40am from Ellesmere Street, Tower Hamlets, London.
DNA checks from the scene later identified the 15-year-old boy as one of the offenders.
CCTV checks from the previous day (Thursday, April 12) identified Smith, Coughlan and the 29 year old carrying out a reccy at the museum, paying particular attention to the Chinese gallery which housed the stolen artefacts.
Det Chief Insp Jim McCrorie said: "Today's sentencing follows a large scale operation and a great deal of work to ensure those involved in this burglary were caught and convicted.

"Sadly the items, which are of huge cultural significance, have still not been traced but we remain committed to following any new lines of enquiry that could lead to their recovery.”
The court heard that the amount of compensation being sought was around £60 million to take account of interest.
The loss adjusters are issuing a reward appeal for information leading to the recovery of the stolen property and an advert will appear in the Antique Gazette this week.

Three members of a gang who stole millions of pounds worth of Chinese antiques from a Cambridge museum in an act of 'cultural vandalism' have been jailed for six years each.
The four-strong gang carried out a professionally planned raid to steal the pre-selected items from Cambridge University's Fitzwilliam Museum on April 13.
They took eighteen irreplaceable "culturally significant" jade artefacts, worth an estimated total of between £5 million and £15 million. However, The court heard that the amount of compensation being sought was around £60 million to take account of interest.
The ancient items are believed to have been sold to rich private collectors and may never be seen again.
Passing sentence at Cambridge Crown Court, Mr Justice Fulford described the raid as an act of "cultural vandalism".
The judge said: "This resulted in the loss to the museum and the public at large, not only in this country but across the world, of pieces of incalculable cultural significance and many millions of pounds in monetary value."
Steven Coughlan, 25, of Gypsies Residential Site, in Eleanor Street, Bow, east London, Robert Smith, 24, of Rosedale Stables, Swanley, Kent, and a 29-year-old man from London, who cannot be named for legal reasons, will each serve six years after admitting conspiracy to burgle.
Marvin Simos, 16, of Hanameel Street, Victoria Dock, London, admitted burglary. He was sentenced to a four month detention and training order.
The haul has never been recovered and some of the items may have been damaged as the gang fled, the court heard.
David Scrase, acting director of the Fitzwilliam, said in a statement read to the court that the raid had damaged the museum's precious reputation for "guarding treasures".
Posted by Art Hostage at 3:05 pm

Thanks for this; somehow the resolution of this crime (well, not quite resolution, as they haven't found the jades) had passed me by (even though I commented to BBC Cambridgeshire on the burglary when it first happened!). So, I'm happy to have had read this follow-up. I can't believe that some youths managed to 'smash' their way into the museum. I mean: 'smash'?! Also, some more accomplished criminal is behind all this because how could such nouseless youths know what to steal and, most tellingly, know how to make it disappear? They clearly sold it to someone and acted on someone's behalf; what do you think?