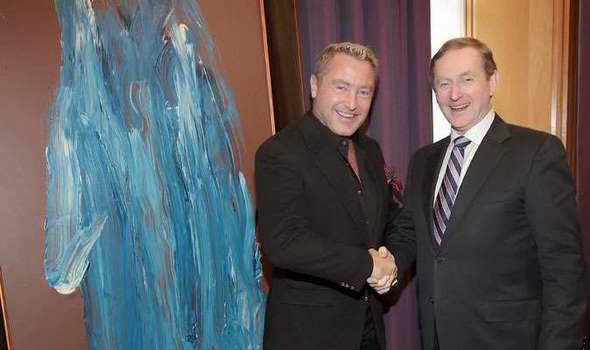 Tuesday, January 28, 2014
Michael Flatley and his family were in their lavish 18th-century home last night as thieves broke in and stole a rhino horn.

The burglary took place at the Castlehyde property of the Lord of the Dance, which overlooks the River Blackwater in Cork, after 6.20pm. Mr Flatley and his family, who spend limited time at the sprawling Fermoy estate, were unaware of the robbery at the time.

The four-storey mansion holds many treasures, not least a Steinway grand piano, a valuable collection of flutes and rare collections of French and Italian wines but a senior Garda source said the gang stole just one rhino horn. “They specifically targeted this item, a rhino horn,” the garda said.

Gardaí believe the gang had the property under surveillance for quite some time. About three years ago, gardaí intercepted a gang, believed to be from Clare and Limerick, en route to Castlehyde with sophisticated burglary equipment.

An Irish gang specialising in the theft and trafficking of illegal rhino horns, is the subject of a threat notice from criminal intelligence agency Europol.

According to Europol, the Traveller gang — which has links to Rathkeale in Limerick — sources and acquires rhino horns through targeting antique dealers, auction houses, art galleries, museums, collectors and zoos.

THIEVES escaped with valuables including African rhino horns worth an estimated €400,000 after Lord of the Dance star, Michael Flatley, accidentally disturbed them at his home.The star went to investigate a suspicious noise at the north Cork mansion at 6pm this evening as he was playing a computer game with his son, Michael Jnr. and wife, Niamh.

He was shocked to see dark-clothed figures running from a wing of Castlehyde House.
The star drove up to the main road to try to follow the thieves but they had made their getaway.
At least four raiders were involved in the robbery of the north Cork property with a major Garda investigation now underway.
Almost a dozen Gardai were at the property within minutes of the alarm being raised.
No one was injured in the raid though the dancer and his family are said to be shocked.
Gardai and the dancer’s employees are now engaged in a detailed check of the house inventory.
The mansion – purchased by the star in 2001 for €4.5m – was renovated and refurbished at a cost of almost €30m.
The star has a hunting room in the property which included a mounted African rhino including its horn.
Gardai have confirmed that the rhino horn was stolen but are now checking to see what works of art, jewellery and books may be missing.
Gardai are now appealing for anyone who may have spotted suspicious activity near Castlehyde or along the Fermoy-Mallow Road.
They are also checking CCTV security camera footage from premises in Fermoy to determine the movements of truck and vans. 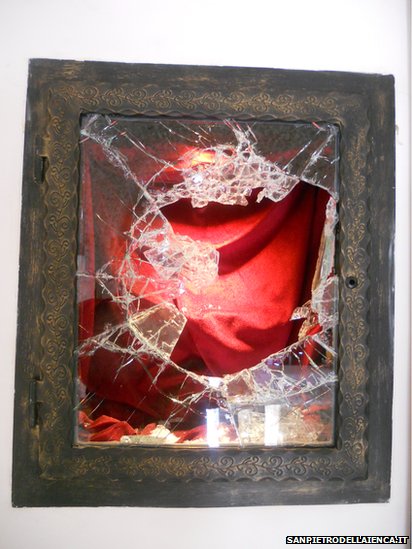 Italian police are hunting for a stolen holy relic that contains the blood of Pope John Paul ll.
It appears to have been taken during the burglary of a small chapel that was a place of special significance to the late Pope.
The church of San Pietro della Ienca lies in an isolated spot in the mountains of central Abruzzo region.
Over the weekend, thieves broke some protective iron bars and forced their way in through a window.
They left the collection box, but took a crucifix and the priceless relic, which contains a piece of gauze once soaked in the blood of the late Pope - one of only three such relics in the world.
Members of the local cultural association supporting the chapel are distraught.
"We are very displeased by the theft. We have no idea of who could have done it. The police are carrying out a search," said Franca Corrieri, a member of the association, speaking to the BBC.
The Pope used to escape the pressures of life in the Vatican by coming to the mountains.
"This is an area that John Paul II visited often, with his secretary and not too many bodyguards. We feel very connected to him. After his death, his secretary, Cardinal Stanislaw Dziwisz, came and told us that he wanted this church to become a sanctuary," said Ms Corrieri.
Dozens of police officers are now searching the area with sniffer dogs. 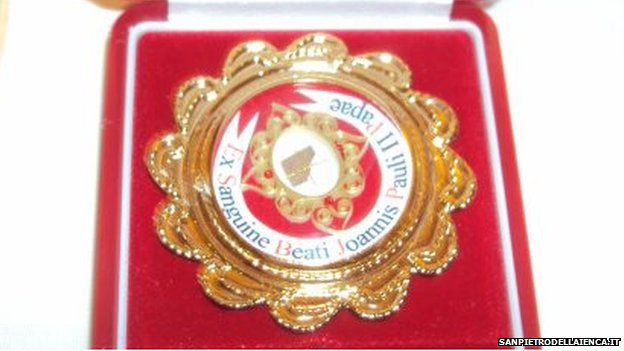 The relic contains a piece of gauze once soaked in the blood of the late Pope John Paul ll
Update:

L'AQUILA, Italy, --
A Catholic relic containing the blood of Pope John Paul II is lost because thieves in L'Aquila, Italy, do not know where they left it, police said Thursday. The blood-soaked cloth was stolen from a L'Aquila church over the weekend, and the two teens arrested in the theft did not understand the value of the relic or remember where they disposed of it, the Italian news agency ANSA reported.
Police found the iron frame of the reliquary, the container of the relic, on Thursday and arrested the men. A third suspect is being sought.
The reliquary and a small crucifix on the altar were discovered missing Sunday morning from the church of San Pietro della Ienca in central Italy's Abruzzi region. The suspects are believed to have broken in through a side window in the sanctuary, according to a post on the church's website


There is no appetite for the ongoing campaign of dissident republican violence, a leading dissident has said.

Dominic McGlinchey Jnr, 36, whose father of the same name was the notorious INLA leader before his 1994 murder, said that republicans opposed to Sinn Fein’s strategy needed to “have a conversation about the future of the republican movement”.
The intervention by Mr McGlinchey comes as the latest in a lengthening line of veteran republicans at variance with Sinn Fein who have spoken out about the futility of the continuing campaign of bombings and shootings.
Several former IRA men have given interviews to the News Letter in which they have urged fellow republican opponents of Sinn Fein to desist from violence.
In December, former prisoner Anthony McIntyre told this newspaper: “Republicans lost the war and the IRA campaign failed and the dissidents need to be told that it failed rather than be allowed to continue thinking what they do.”
Richard O’Rawe said at that time that the dissidents’ “whole campaign is insane” and should stop.
Mr McGlinchey — who has vigorously denied an allegation that he had any involvement in the 2009 Massereene murders and has never been charged in relation to the attack — told the Irish News: “I don’t believe the appetite exists among the people. That’s not to say there is not considerable support among certain segments of republicanism for particular types of resistance but what is very clear is that the appetite is not there for a full-blown campaign.”
He added that dissidents needed to consider if “certain tactics are holding you back from entering a new field of battle”. Milwaukee Symphony Orchestra concertmaster Frank Almond
The Milwaukee Symphony Orchestra said Wednesday that concertmaster Frank Almond is unharmed following the armed robbery of a borrowed Stradivarius violin estimated to be worth millions of dollars.
Almond was attacked in a parking lot Monday night following a performance at Wisconsin Lutheran College in Milwaukee. The thieves used a stun gun in the incident, causing Almond to drop the violin in its case, Milwaukee Police Chief Ed Flynn said in a press conference. Flynn said police suspect the thieves specifically targeted the rare violin, known as the Lipinski Stradivarius. The violin is reportedly worth $6 million, according to Milwaukee Business Journal news partner Fox 6.
In a statement, management of the Milwaukee Symphony said it is "profoundly thankful" that Almond remained unharmed.
"It was through a rare and generous gift that Frank acquired the Strad six years ago," the MSO said. "Its theft is a tremendous loss for the anonymous donor who was currently loaning Frank this priceless treasure, a great loss for Milwaukee’s cultural community and the international arts world."
Flynn described the incident as an "art theft" with the violin valuable to only a small population. Officials from the FBI Art Crime Team, which works with Interpol, are involved in the investigation.
The MSO said it is cooperating fully with local, federal and international authorities.
"Unlike other priceless works of art, the beauty of the Strad lies not only in its form, but in its function," the MSO said. "We hold every hope that it will be recovered and returned to its rightful owner and the professional musicians who share its true beauty with the public through the power of the music."
Frank Almond Playing the Lipinski Strad Violin

The New Walk Museum and Art Gallery in Leicester
A collection of Egyptian jewellery worth £40,000 has been stolen from the New Walk Museum and Art Gallery in Leicester. According to the newspaper the Leicester Mercury, the items were stolen in May 2012, but the theft was not revealed to the public until a recent Freedom of Information request. The thieves, who apparently broke a latch on a display case to gain access to the artefacts, have so far evaded arrest and none of the pieces have been recovered.
New Walk Museum's Egyptian collection—the largest in the East Midlands—mainly consists of objects donated by the British School in Rome and the Egypt Exploration Society in the 19th and 20th centuries. The most expensive pieces reported as stolen are a 4,000-year-old pendant worth £15,000, and a £12,000 bronze necklace. Other objects date to the Graeco-Roman Period (332BC-AD394), including earrings and bronze bracelets.

This is not the first theft from New Walk Museum in recent years; in April 2012, two pieces of Asian jewellery were stolen, while in September 2012, three rhino horns also went missing. The museum has now spent £90,000 upgrading its security.
Posted by Art Hostage at 1:51 am