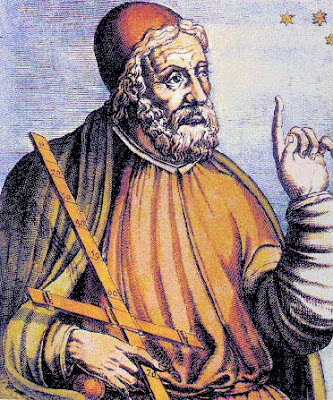 MADRID -AFP - Police in Australia have recovered two maps of the world by the ancient Greek astronomer and geographer Ptolemy, above, which were stolen from Spain's national library, Spanish media reported Friday.

The maps, printed in 1482, were found in Sydney at the home of an Australian antiques dealer who had bought them at an auction in London, El Mundo newspaper said on its website.

It said police believed the maps were stolen by a Spanish national of Uruguayan origin living in Argentina, Cesar Gomez Rivero, 60.

The two maps, which were stolen on August 21, came from two identical works by Ptolemy, who lived from 83 to 161 AD, and were printed by Leinhart Holle in 1482 in what is now the German city of Ulm.

The names of the Australian dealer and the London auction house were not revealed.

The maps were found by Australian police, who alerted their Spanish counterparts, El Mundo said.

I wonder if, during questioning, this Australian Antiques dealer was asked if he knew anything about the Cavalier theft earlier this year?

Perhaps as some kind of plea deal, the Cavalier may be recovered ?

Australian Authorities can act in a pro-active manner see below:

Apply this forward thinking to investigating the Cavalier theft for a quick recovery.

The stolen map story shows us that global stolen art trafficking is as fast as an e-mail.