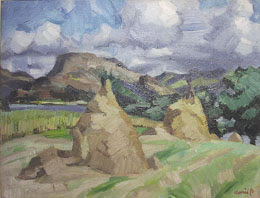 Antiques worth thousands of pounds stolen from blind widow

A blind elderly widow has been left devastated after thieves stole tens of thousands of pounds worth of rare antiques and paintings from her home, police said yesterday.

A £10,000 grandfather clock and five paintings, including two watercolours by Scottish Colourist Samuel Peploe's son, were among the haul of around 20 items taken in the raid on the 89-year-old's terraced house in Edinburgh. Police believe the housebreakers probably targeted the house in Minto Street, Newington, deliberately, striking in daylight and possibly on more than one occasion in the hope that passers-by would mistake them for removal men as they entered the property through the back garden.

The frail victim - who had recently moved out of her three-storey home because it was too big for her to manage alone - is distraught at the loss of the heirlooms which have been in her family for generations.

Her son discovered the break-in on Monday when he checked on the property, which police believe was raided within the last week, although it could have been up to 11 days earlier.

Shocked neighbours in the attractive street, which is lined with large townhouses, many of which are B&Bs, said they hadn't noticed anything suspicious. Police described the raid as "unusual" and officers are appealing to anyone who thinks they saw anything odd to contact them as soon as possible.

DC Ben Leathes, of Lothian and Borders Police, said: "A lot of the items taken have great sentimental value and family history attached to them, and the lady is understandably distressed.

"The amount of items and the size of items taken indicates that they the thieves had transport, either a van or bigger, and they may have potentially visited twice.

"I would imagine it was carried out during the day because it would have drawn more attention to them if they came at night, going though the back garden. They would also need light to see as they manoeuvred the furniture out.

"It would not be unusual to see a removal van in the area. There's a good chance that someone saw something. The area is filled with B&Bs, so there are a lot of people coming and going."

Referring to the five-figure sum which police believe to be the total worth of the stolen goods, he added: "It is certainly unusual. In most housebreakings you are unfortunate if you lose £1000 of stuff, and it is mostly electrical goods which are easy to resell and difficult to trace which are taken.

The most valuable items taken were two distinctive dark mahogany chairs, one with a scene from Charles Dickens' Oliver Twist carved into its back, the other featuring a Rob Roy-like scene, thought to be worth more than £10,000.

Both the Denis Peploe paintings were sea views, while the three other pictures were gilt-framed oil paintings of country scenes, including one of a cornfield, marked Fraser.

The 7ft 19th century grandfather clock had a silver face with black Roman numerals. A 19th century mantlepiece clock which was also stolen featured a foot-tall black eagle on its top. Two silver teapots, a 3ft revolving bookcase and three wooden tables were taken as well.

One neighbour, who did not want to be named, said: "I haven't heard anything about this, but it is quite concerning."

A police search and recovery team will be contacting antique dealers and registering the items as stolen at auction houses and on websites.