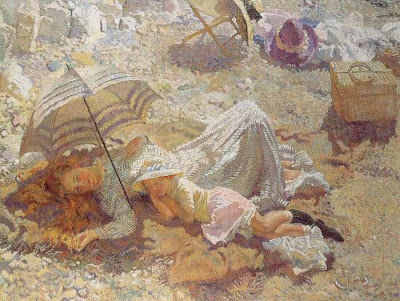 http://www.antiquestradegazette.com/news/7213.aspx
A LENGTHY police investigation has led to the jailing of a retired solicitor, convicted on charges linked to money laundering and efforts to sell a stolen £500,000 painting.

Anthony Blok, aged 72, was jailed for four years on July 1 after being found guilty of money laundering, perjury and perverting the course of justice. Croydon Crown Court heard how Blok had abused his privileged position as a solicitor by receiving cash to pay the bail of one of his clients, concealing cash in his office and attempting to sell a stolen painting.

One of Blok’s clients, ‘Brighton Knocker’ Michael Underwood, took a painting by Sir William Orpen, valued at up to £500,000, from the Isle Of Man home of the artist’s descendants. Underwood was charged with laundering the painting in the UK with Blok, but he fell ill the morning he was due to give evidence and is now considered unfit to stand trial.

He would rather have gone to prison than reveal where the painting was, said the Art Loss Register.

The Metropolitan Police’s Art and Antiques Unit launched an unsuccessful operation to recover the painting, but when the Proceeds of Crime Act 2002 came into force, it meant the Met’s Money Laundering Investigation Team could investigate Blok further.

As well as uncovering evidence of corruption and money laundering, the police seized £30,000 in cash when they searched Blok’s office in 2006, but the painting was never recovered.

Julian Radcliffe, the chairman of the Art Loss Register, who gave evidence at the trial, said: “We were able to protect a legitimate dealer, who searched with us, from buying a stolen picture and assist the police with their investigation.

“Simon Muggleton, a retired detective from the Sussex Police Antique Squad first gave evidence concerning tactics used by Underwood. DS Mark Radford of the Metropolitan Police is to be congratulated on his persistence to bring this case to a successful conviction. We will be pursuing those involved for damages on behalf of the victims where the property has not been returned.”
Art Hostage Comments:
Art Hostage will post extensive comments shortly....................
Posted by Art Hostage at 1:17 pm