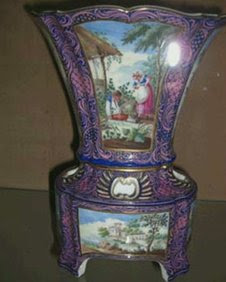 Stately home thefts may be linked
http://news.bbc.co.uk/1/hi/england/sussex/8168875.stm
Two burglaries from nearby stately homes in East Sussex in the past week could be connected, police have said.

On Thursday night, two silver chandeliers worth about £20,000 were stolen from Glynde Place, in Glynde.

If followed the theft of rare Sevres porcelain valued at £1m from Firle Place, in Firle, on Sunday night.

Det Ch Insp Mike Ashcroft, of Sussex Police, said although there were differences in the two robberies, there were also similarities.

Glynde Place, an Elizabethan manor house, is home to the Viscount and Viscountess Hampden, while Firle Place has been the home of the Gage family for more than 500 years,

Both have been used as film and TV locations and are open to the public.

A pair of identical vases made in 1763 and a Hollandaise Nouveau vase were among items stolen from the porcelain collection at Firle Place.

Owner Lord Gage described it as a "personal loss".

"It does look as though it was a completely professional job.

"We thought it was like Fort Knox, the burglar knew what he was doing... the collection we thought was completely safe has now been impaired," he said, adding that the items were of "national importance".

"Every insurance company will know about it, every museum. Already all the customs will have been advised.

"Really, these pieces will be impossible to get rid of," Lord Gage said.
Posted by Art Hostage at 7:00 pm