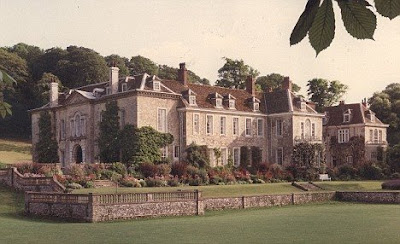 Rare antiques worth £1million have been stolen from a stately home in the heart of the English countryside.
Burglars raided the mansion, used to film TV shows including Jonathan Creek, and stole important pieces of Sevres porcelain, including a pair of identical vases made in 1763.
The thieves also swiped a rare Hollandaise Nouveau vase from Firle Place near Lewes, East Sussex.

The historic mansion has been the home of the Gage family for more than 500 years and its surrounding parkland is set in an area of outstanding natural beauty at the foot of the South Downs.
Lord Gage, owner of Firle Place, said: 'I and my son Henry are shocked by the crass nature of this burglary which will prevent members of the public viewing this historic porcelain.'
The estate, estimated to be worth £10million has been hit by burglars before.
In December 2004 antiques worth £100,000 were snatched from the stately home and in 2001 two antique tables worth more than £10,000 were stolen during an open day
The furniture was taken from the drawing room and at the time police said it appeared the thieves paid their £4.50 entrance fee to get into the house and then carried off the two small tables.
The house, designed to look like a French chateau, has 14 bedrooms and is surrounded by manicured lawns.
The Gage family have been living there since 1475 and the mansion houses one of England's finest collections of art - including paintings by Van Dyck and Gainsborough - antique furniture and porcelain worth millions.
The house is open to the public in the summer months.
Sussex police said last night that reward may be offered to members of the public with information that leads to the recovery of the stolen property.
Detective Sergeant Simon Atkins, leading the investigation, said police were conducting a 'thorough investigation' after the raid, which happened sometime between Sunday and Monday, to locate the missing property and bring the criminals to justice.
-
Art Hostage Comments:
Comments to follow...............................
Posted by Art Hostage at 9:20 am

I am very sad to hear about this theft, but I can't imagine how it was achieved overnight. It makes me despair about human nature. As a 'foreign' visitor to this treasure, but UK resident now, I must say that it always epitemised the trusting nature of many English people, and the unpretentious, generous approach the Gage family has to sharing their heritage with the public. They could easily be a lot more cautious and not open their house to others. In other countries there would probably also be a lot of hype and high security, which changes the value of the experience for visitors.

I just hope these wonderful works are found and returned one day to the place where they belong. and thank you to the Gage family for your openess and hospitality.