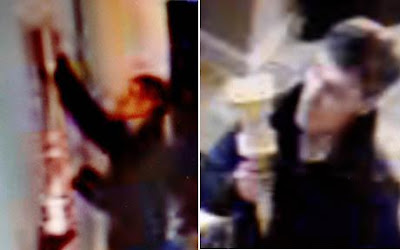 http://www.telegraph.co.uk/news/newstopics/politics/lawandorder/5818133/Thief-steals-antique-barometer-from-museum.html
A thief, Simon Hargreaves, stole a 300 year-old barometer to order from a museum by unscrewing it from a wall and smuggling it out under his coat, a court heard.

Hargreaves stole the £150,000, 3ft antique from Fairfax House, a Georgian town-house museum in York, leaving a yawning gap on the wall.

It was not until the following day that staff realised it was missing and checked the CCTV system, where they discovered footage of Hargreaves removing the piece.

The barometer dates from 1695 and is by celebrated craftsman Daniel Quare, whose customers included the Royal Family and whose work can still be seen in Windsor Castle, the Science Museum and other high-profile venues.

York Crown Court was told that Hargreaves, 38, who has 90 previous convictions, mainly for shoplifting, had lost his catering job just days before he was offered £200 to steal silverware from the museum.

Jumping at the chance to earn some cash Hargreaves, of Wakefield, West Yorks., agreed and went to the house - which was built in 1762.

Prosecutor Stephanie Hancock said that once inside Hargreaves was shocked at the extravagance of the silverware which was tightly secured in glass cabinets, watched by CCTV cameras.

Instead his attention turned to the ivory and brass-plated barometer.

Hargreaves, who pleaded guilty to the theft, was arrested on June 6 after police tracked him down using CCTV and fingerprints they had found on a brochure he had handled as he walked around the museum.

The barometer was recovered on the same day as Hargreaves' arrest in good condition near a landmark in Fulford, North Yorks., by police following an anonymous tip-off to Crimestoppers.

Mitigating, Andrew Hatton said: "He had no idea the value of the barometer but it looked easily stealable and was insecurely fastened. He thought that was an indication of it's value.

He added: "He was completely dumbfounded by what he had done. Once he realised the significance of the piece that was taken he took steps to ensure it was returned."

Sentencing him to two years in prison, Recorder Simon Bourne-Arton QC said: "You have got a very bad and extensive record but in the main for petty offences, but they have been persistent and they are numerous. You have stepped up a league here in the dishonesty and the offending carried out.

"It is no accident the barometer you stole is of this high value. You knew it was a valuable item. If you take part in a professional offence such as this you get a professional sentence that follows."
Art Hostage Comments:
Hargreaves is smiling in the top photo as he knew he could rely on the secret letter handed to the Judge by Police as Hargreaves has informed on those who ordered the Barometer theft and Police are now closely watching the named individuals and will pounce when they catch them in the act.
-
No mention of the woman who accompanied Hargreaves during the Fairfax Barometer theft.
-
Hargreaves threatened to inform on those who ordered the Fairfax Barometer theft if they did not hand back the barometer.
-
These guys handed back the barometer to try and keep their names out of the investigation.
-
However, Hargreaves went ahead and informed on them anyway and Police now know who ordered this theft, but cannot prove that unless Hargreaves would give evidence to that fact, which Hargreaves would not be prepared to do, so far that is.
-
The Daniel Quare Barometer was the intended target from the start and any reference to silver is complete bullshit.
-
Those who ordered this theft were well aware the silver in Fairfax House is under lock and key and it was the Barometer that was identified as the target.
-
In this particular instance authorities can count themselves very, very lucky to have recovered the Daniel Quare Barometer and this should not be taken for granted as other high value artworks will not recovered in such an easy manner.
-
There is more to come out and Art Hostage will update..................
Posted by Art Hostage at 6:49 pm

We really thought he had got sorted, what a shame.

He bears no resemblance to the rest of his family we are all deeply appalled.

No he don't prick