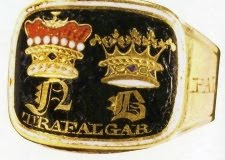 A review of security has been ordered at Norwich Castle after valuable artefacts connected to Lord Nelson were snatched in the second raid on the museum in a week.

Historic items connected to the Norfolk naval hero, worth more than £36,000, were stolen on Saturday, February 25, after an attempt was made to snatch a rhino horn five days earlier.

The county councillor whose portfolio covers the museum service this morning spoke of his shock at the theft and said measures were being taken to ensure such a crime does not happen again.

The national security advisor for the Arts Council has been asked to carry out a full security review at the castle museum. James Carswell, cabinet member for cultural services, said: “Clearly, as these were Nelson artefacts, I know the people of Norfolk will be angry.

“I was in complete shock when I was advised and found out about this. I have spoken to the director and the heads of the service and asked for a strategic review to look at processes and why this happened.

“As a service, we are incredibly sorry this has happened. The individual who stole these items has no respect for this county.

“We are sorry this has happened and will do everything we can to make sure this never happens again.”

The theft was discovered by an off-duty police officer who was visiting the museum.

He noticed a display cabinet appeared to be insecure and it was then that staff realised that items had been taken.

Two bronze medals, worth £400 each, were also taken. One commemorates the Battle of the Nile on August 1 1798 while the other marks the death of Lord Nelson and is dated 1805.

A stolen gilt metal box containing four medallions commemorating the victories of various admirals has been collectively valued at £1,000.

Police are trawling through CCTV footage from the museum, which they hope will help with their investigation.

Five days before the theft, four people tried to snatch a rhino head from the museum, but were foiled by a curator who grabbed it back.

The raiders, all wearing dark coloured clothing, were believed to have escaped in a dark-coloured hatchback parked outside the castle which was driven by a fifth person.

Thieves target Norwich Castle again – and get away with Nelson artefacts

Valuable Nelson artefacts worth more than £36,000 were stolen from Norwich Castle in the second attack on the museum in the same week.

The historic items, including a £25,000 mourning ring and a £10,000 saucer from a 1802 tea service which was part of the inventory at Lord Nelson’s home, were all discovered missing from a cabinet at the attraction on Saturday February 25.

It followed an attempted theft of a rhino horn just five days before.

Vanessa Trevelyan, head of the museums service, said: “Last Saturday we discovered one of our display cases housing a number of Nelson artefacts had been broken in to and several pieces were found to be missing. We informed Norfolk Constabulary who are investigating the theft.

“We wanted to carry out a thorough investigation before going public to determine exactly what had happened but also to make absolutely sure nothing else had been taken from the museum. Of course enquiries were under-way during this time.”

Norfolk Police said the theft had been discovered at about 2pm on February 25. A spokesman said: “An off-duty police officer was visiting the museum last Saturday during the afternoon when he noticed that a display cabinet appeared insecure.

Police have got hold of CCTV footage from the museum which they hope will help with the investigation.

Two bronze medals, worth £400 each, where also taken. One commemorates the Battle of the Nile on August 1 1798 while the other marks the death of Lord Nelson and is dated 1805.

A stolen gilt metal box containing four medallions commemorating the victories of various admirals has been collectively valued at £1,000.

County councillor George Nobbs, a member of the Norwich area museums committee, said: “It’s hard to think of anything that’s more precious to the people of Norfolk that the museum service has than its Nelson artefacts.”

The Labour councillor criticised the county council for not releasing details of the theft and appealing for witnesses earlier.

And he said the theft proved a decision to get rid of the museum’s 20-strong interpretation team, which used to patrol the galleries answering visitor’s questions, had been “foolish and short-sighted”.

“Had the interpretation team not been got rid of there would have been less chance of this happening,” he said.

The councillor said he would be raising the issue “as a matter of urgency” at the next Norwich area museums committee meeting.

In the mean time, Ms Trevelyan said the museums service would continue to work closely with police.

She added: “This is obviously a serious incident and one which we are treating with the utmost gravity. A full review of security arrangements at the museum is being undertaken in the light of this theft and a recent attempted theft of a rhino horn from the museum.”