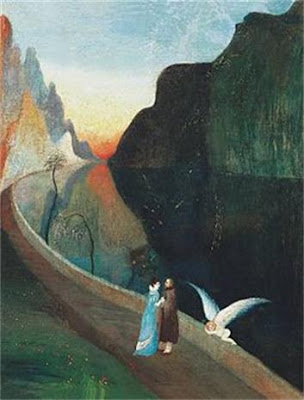 The painting, sold for Ft 230 million at a Budapest auction in December 2006, was taken from its owner’s home on Orom utca in the First District.

The thief or thieves made off with three other valuable paintings by Pál Szinyei Merse and László Mednyánszky, each worth tens of millions of forints.

The Csontváry painting was sold at an auction in Budapest in December 2006 at the record price of HUF 230 million (EUR 910,000 then, EUR 785,000 now). Police announced that this painting, along with other works painted by renowned Hungarian artists Pál Színyei Merse and László Mednyánszky, were stolen on March 15.

Péter Buzinkay of the National Office of Cultural Heritage told Hungarian Television that this painting by Csontváry is a protected work of art – the others stolen are protected but well-documented as they turned up at several auctions and exhibitions.

Csontváry’s ‘Rendez-vous of Lovers’ is believed to have been painted around 1902. It had not appeared at auctions – and even researchers were not aware of its whereabouts – for a long time. In 2006, it was put up for auction by a family whose members did not consider themselves as art collectors but were in possession of this work of art for six decades.

An unnamed art dealer interviewed by Magyar Hírlap suggested that the stolen Csontváry painting could have been taken out of the country a few hours after the robbery.

He said such high-priced paintings are stolen only by special order, and that everything is thoroughly organised before such a theft."