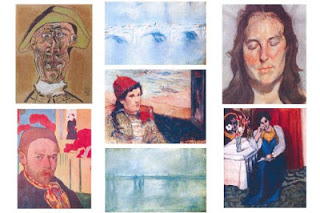 Kunsthal art heist: suspects want to be tried in the Netherlands

The three Romanians charged which stealing seven valuable paintings from Rotterdam’s Kunsthal museum last October want to be tried in the Netherlands, their lawyer has told the Telegraaf.
Earlier this week it emerged the Dutch public prosecution department had decided not to begin proceedings to have the men extradited, saying they would go on trial in Romania. Dutch legal experts said this was a very usual step.
But the men’s lawyer Bogdan Cimbru told the Telegraaf if they are not tried in the Netherlands ‘the paintings will never be recovered’. 'They have made this very clear,' the lawyer said.
The men are worried about spending time in a Romanian prison and do not think they will get a fair trial, Cimbru told the paper. They want to agree a deal with the public prosecutor, he said.

Minutes
The heist took place on October 16 in just a few minutes. Works by Monet, Picasso, Matisse and Gauguin were among the seven stolen.
A 19-year-old Romanian woman will face trial in Netherlands. She is being held on suspicion of possessing the paintings in the period after the robbery.
Police think the paintings were taken to a property in Rotterdam where the woman lived. There the paintings may have been removed from their frames.

The Cologne public prosecution service says the man was attempting to blackmail the Triton foundation, which owns six of the paintings, news agency ANP reported. The foundation lent the works to the Kunsthal as part of an exhibition to celebrate the gallery's 20th anniversary.

It is not clear how much money the man was demanding or if he was bluffing, ANP said. No trace has been found of the paintings since the October heist.

The man, a 46-year-old German national, is said to have met representatives of Triton at the end of last year in Cologne. Police got wind of the meeting and started an investigation, ANP said.

Experts on stolen art such as Britain’s Art Loss Register say that thieves often don’t understand how difficult it is to sell easily identifiable paintings by famous artists. After thieves are unable to dispose of them for anything resembling their value at auction, they frequently attempt to ransom them back to their owners.

But Bremer said there were still a lot of questions surrounding the German suspect — including whether he might be a scam artist with no connection to the paintings.

Bremer said his office was involved because the suspect had contact with two lawyers in the Cologne area — both by telephone and in person. Both were “involved in offering the return of the paintings” but neither have been arrested. “What role the two attorneys played is part of the investigation,” he said.

Dutch national broadcaster NOS news reported that representatives of the Triton Foundation had met with the lawyers in late 2012, then notified the police.

Bremer said the suspect will be transferred to Cologne within several days.
He said his office had been investigating the case since November 2012.

Three Romanian nationals face trial in Romania for stealing the paintings, which include works by Matisse, Monet and Picasso. A 19-year-old Romanian woman has also been arrested in Rotterdam.
Posted by Art Hostage at 4:23 pm