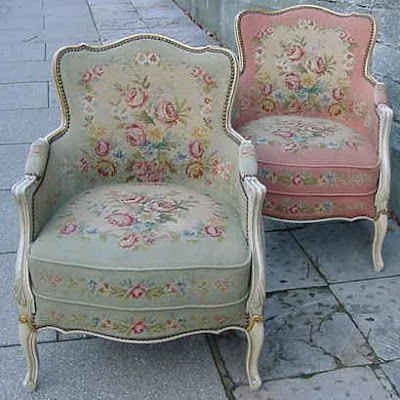 Police think two men forced their way into The Bakhtiyer Gallery through a window at the front of the High Street shop.

They took the two cream chairs, which had flower tapestry seats and are valued at £3,500, from inside.

Officers think the men left in a 4x4 vehicle and headed towards Salisbury on the A30.

"The glass is quite thick so they didn't really break it, they just shattered it, but the frame in the end gave way and fell into the gallery.

He said it pained him to have any of his antiques stolen.

Mr Mazaheri-Asadi added: "Stockbridge is a lovely place with wonderful galleries and we want to be able to give people nice antiques, it's a shame some idiots like this have to spoil it."

PC Aaron Sawyer, of Andover police station, said: "The thieves were selective and took only two items of high value.

"Police are interested in any vehicles or people that may have been seen in suspicious circumstances in the days leading up to the incident."

U'm, they used a 4x4, were last seen heading for Salisbury on the A30.

Well it is not Rocket Science to realise there is a large Traveller camp on this route and perhaps Police should check the 4x4 vehicles parked there for a match?

Who knows if Police were to act with hast they may even recover the chairs before they are sold at ---- market Saturday.

Sadly Police don't give art and antiques theft priority which leads one to wonder if Andover Police should be renamed "Bend-Over Police" as they seem to be allowing Antiques theft to happen Andover Fist !!

Upon another note, it is interesting to see Multi-cultural Britain stretches to the Boon-docks.

The Antiques dealer who lost these chairs is called Mr Masoud Mazahri-Asadi, and his gallery is called The Bakhtiyer Gallery, historically the dealer would be Smith, Brown and the Gallery called Georgian House, English Country House or just plain Stockbridge Gallery.

Masoud, do yourself a favour and check out the 4x4's housed at the Traveller camp, if you want your chairs back you will have to do the ground work before Bend-Over Police will act.