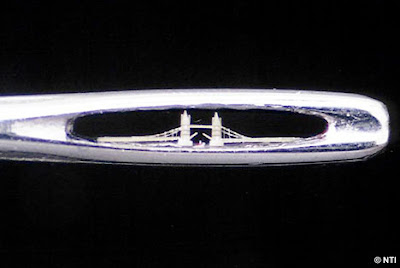 BIRMINGHAM, England, Aug. 17 Three micro-sculptures worth about $1 million were reunited with their creator six years after they were stolen during a London exhibition.

The three were an unexpected part of a $40 purchase during a car trunk sale last month by Anthony Barry. When he and his fiance found a black box containing three needles and told they were actually tiny sculptures, "my fiance, Jolene, immediately thought of (sculptor) Willard Wigan because she had seen him on TV," Barry told the London Daily Mail.

The tiny works of art, less than 1 millimeter tall and mounted in the eyes of needles, were stolen at a London exhibition. The three pieces were Snow White and the Seven Dwarfs, Tower Bridge and Jesus.

"Being a craftsman myself I can appreciate the blood, sweat and tears that can go into a piece of work," Barry, a cabinetmaker, told the newspaper.

The pair met in Birmingham last week where the micro-sculptures were returned to their owner.

"Anthony knew how much the pieces were worth but that didn't matter," Wigan said in the Daily Mail article. "He said they belonged to someone else and it wouldn't be right for him to keep them.


Three micro sculptures worth half a million pounds which were stolen six years ago have turned up at a car boot sale for £20.

Artist Willard Wigan thought he had lost his prized work forever after they were stolen at a London exhibition in 2001.

The tiny works of art are less than a millimetre in size and are mounted in the eyes of needles making them barely visible to the naked eye.


So there actually was a better chance of finding a needle in a haystack.

The three pieces; Snow White and the Seven Dwarfs, Tower Bridge and Jesus, had all been stolen from a Covent Garden exhibition in 2001 when he left them unattended for a short while. 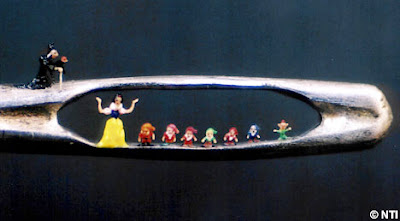 But when Anthony Barry spotted the minute pieces for sale at a boot fair last month, he snapped them up for £20.

What Anthony or the boot fair seller obviously didn't know was that the full-stop size models were worth £165,000 - each.

Cabinet Maker, Anthony, 27, from Marlborough, Wiltshire, said he stumbled across a black box with three needles inside.

He said: "When we were told there were tiny sculptures inside the eyes of the needles my fiancee, Jolene, immediately thought of Willard Wigan because she had seen him on TV.

"When I got them home, I found a big magnifying glass and saw Snow White with her arms missing and only three dwarves by her side.

"I then read on the Internet about Willard Wigan having some work stolen back in 2001.

"To be honest I was a bit gutted because I knew I had to give them back to Willard.

"Being a craftsman myself I can appreciate the blood, sweat and tears that can go into a piece of work."

The pair met in Birmingham city centre last week where the micro scultptures were returned to their grateful owner. 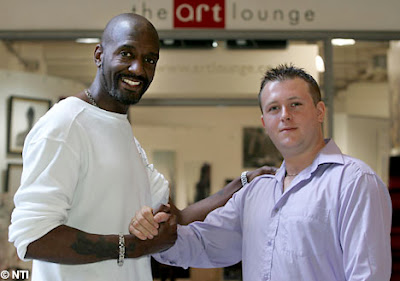 When Willard got the phone call telling him his work had turned up at a boot fair he thought it was a wind-up.

Willard, 50, from Birmingham, said: "I was in complete shock, I thought to myself; 'Is this real, or is someone pulling my leg?'

"Anthony knew how much the pieces were worth but that didn't matter.

"He said they belonged to someone else and it wouldn't be right for him to keep them.

"He is a truly genuine and honest man which is quite rare these days.

"I didn't think about going to the police - I was just overjoyed to have them back."


Willard said it was like losing part of his family when the pieces were stolen.

The police investigated the incident and put out a TV appeal but there was no news on the valuable miniatures until Anthony contacted Willard last week.

Anthony, who lives with fiancee, Jolene, 22, and 19-month-old son, Aiden, added: "Willard was so happy and overjoyed when I called him.

"How on earth the needles managed to get from a London exhibition to a boot fair in Swindon is mind boggling.

"The lady on the stall just said she had picked up the box from someone else and they had no idea what they were or where they came from."

Despite being out of pocket from the purchase, Anthony is pleased that the work has finally made it back to the creator.

"I really admire Willard's work - the patience and skill required to create something so small is amazing.

"As a reward for me returning the pieces he has invited me to one of his exhibitions and has promised me 'red-carpet' treatment."

Willard, who was presented with an MBE for services to art last month, sold his collection to former England Davis Cup captain turned entrepreneur, David Lloyd, in May.
Art Hostage Comments:
I wonder if the reward will be micro, there is no taste in nothing, or very little ??
Surely the £20 paid by this man for the micro art !!
Would it hurt to wet the beak of the finder if it is proved he acted honestly ?
Or will this show that victims can be mean spirited when they receive their stolen artworks back in an act of good faith?
I am sure that if a decent reward was paid in this case it would further enhance the artists reputation, thereby the decent reward would be cheap if compared to the favourable publicity, at half the price.
The down side is if people see this man not get rewarded for his honourable act they may think twice before returning or helping art recovery in the future.
Just a thought !
Posted by Art Hostage at 9:02 pm