Stolen Art Watch, Too Good To Be True !! 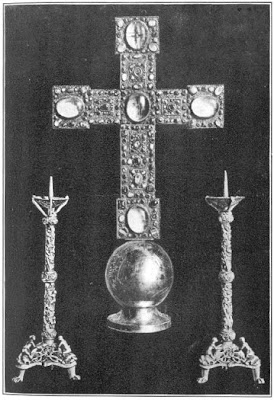 Vienna - An old cross recovered by an Austrian woman from a garbage container turned out to be an 800-year-old French masterpiece stolen from a Polish collection by the Nazi regime, Austrian police said on Thursday. In 2004, the woman from Zell am See in the province Salzburg got permission from her neighbours to look through a garbage container of things they had thrown out.
Among other things, she took an old, gold-coloured cross.
As nobody else liked it, the woman kept the gold-plate and enamel cross under her couch until showing it to art experts earlier this year.
According to experts from Vienna's Fine Arts Museum, the piece of garbage turned out to be a passion cross from a manufacturer in Limoges in France made around 1200.
Similar pieces fetched up to 400,000 euros (537,000 dollars) at international auctions.
Police traced the origin of the cross, showing the piece had been stolen by the Nazi regime from the Polish art collection of Izabella Elzbieta of Czartoryski Dzialinska in 1941.
Pieces from the collection were moved from Warsaw to Austria, where the trail ended in 1945.
The cross's fate still remains unclear. The London-based Commission for Looted Art, informed by the Polish authorities, is representing the heirs.
The local court in Zell am See decided that for the time being the garbage-treasure was to be kept at the local heritage museum at Leogang, where it could be properly stored.

Art Hostage comments:
A little investigation into the background of this woman and her ancestry will show, no doubt, a link to the original theft of this looted artwork.

I bet there is a connection to a relative who was a Nazi and involved with this criminal act and this is just another fabricated story to try and realise market value for stolen art.

It is a bit like saying 9/11 was an Inside Job, when clearly World Trade Centre building Seven was just tired and wanted to have a lay down.

There have been many unproven theories about 9/11, not least the official 9/11 commission report.

My opinion, for what it is worth, is that during the Cold War explosives were placed in many significant buildings across America so that in event of a Soviet invasion these buildings could be brought down by controlled demolition to prevent the invading Soviets from gaining access to them.

Unfortunately these explosives were not removed from the Trade Towers or Building Seven and on 9/11 when the planes hit the twin towers they set off the Soviet era explosives causing the Towers and Building Seven to collapse in a controlled demolition manner.

This theory is somewhere between the Official version and the 9/11 Inside Job theory, a sort of Detente, neither side is right or wrong.