Stolen Art Watch, No Rewards for Bad Guys, Ex-Police, Who are Two Sides of the Same Coin !! 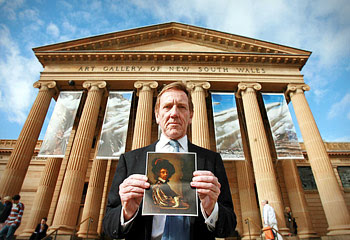 THE Art Gallery of NSW has ignored police advice to offer a reward which could secure the return of a $1.4 million painting stolen in an embarrassing theft.

An art theft expert said a reward could have "thrown a line of communication to the thieves" but the gallery refused to follow advice from The Rocks police and put up the money.

The 17th century painting by Dutch master Frans van Mieris was unscrewed from a wall while 6000 art lovers passed through the gallery on June 9.

Rewards have been used around the world for decades to entice thieves to return artwork, with some caught as they negotiated a ransom, criminologist Ken Polk said yesterday.

In one of the most high-profile cases, arrests were made within two days of a reward being offered for the return of the Edvard Munch masterpiece The Scream in Norway two years ago.

It is understood police first approached the gallery about a month ago after finding few leads in their hunt to find van Mieris' A Cavalier.

Any reward could have been as high as $150,000, with 10 per cent of the value of the work considered appropriate, experts said yesterday.

Interpol, the FBI and Scotland Yard have been alerted to the theft but in the only Australian development, a man aged in his mid-40s was caught by police placing a fake picture of the painting on eBay.

"In the past there have been a number of cases where ransoms have been negotiated either to catch the thief or have the artwork returned. The (gallery) may know something in this circumstance and have decided a reward is not appropriate."

A spokeswoman for the gallery refused to confirm how much the police advised should be offered as a reward.

"After consultation with other organisations, the gallery is not going ahead with a reward at this stage," the spokeswoman said.

The gallery's refusal to follow police advice has come after it emerged that the gallery waited a day after detecting the theft before notifying police.

It was another two days before the public and gallery visitors were alerted to the theft and asked to come forward if they saw anything suspicious.

The Daily Telegraph reported earlier this month that a delicate wood carving of a magnolia by Tokyo-based artist Yoshihiro Suda was plucked from a display wall at the doorway of the gallery's Asian exhibit in 2004.

I admire the honesty and courage of the New South Wales Gallery for taking this hard line and not offering a reward.

As previously stated, rewards are never paid to informants, but only to ex-police officers like Tricky Dick Ellis, of
QUINTONS FARM HOUSE
GROVE LANE
ASHFIELD
STOWMARKET
IP146LZ
who also extort money for investigating art thefts, not that much art is ever recovered down to their efforts, it is just a Gravy Train for ex-police officers to exploit.

I firmly believe that rewards should be forbidden, thus preventing ex-police officers extorting money from art loss victims as well as sending a clear message to potential art thieves:

"Rewards will never, ever, be paid, so when it comes to stealing art, "forget about it", as they say in New York.

O'h I could tell a tale of how Two ex-police officers are extorting monies off a world famous Museum under the guise of investigating their art loss.

These two Ex-police officers pray on art loss victims trauma and exploit this by offering false promises of recovery.

"The ---- Museum would learn more by reading Stolen Vermeer and Art Hostage blogs for free, rather than paying these two conmen for junkets and false dawns"

This guy should know, as he had to pay these two ex-police officers £1/2 million/£500,000 for being baggage handlers on a famous recovery.

To add insult to injury, the Museum in question can learn more about their stolen artworks by reading Stolen Vermeer and Art Hostage blogs free of charge, rather than paying $57,000 dollars last year and God only knows how much this year for information that is pure nonsense.
By refusing to pay rewards the attraction to steal high value art is weaker and hopefully art crooks will turn away from stealing art.
A paradox is that those who will be most affected by refusing to pay rewards are not the art crooks, but the ex-police officers who supposedly investigate art loss.
It does make one wonder who are the real crooks, the thieves, or the money grabbing Ex-Art Squad police officers ?