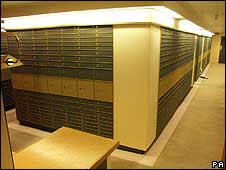 By Tim Castle
http://uk.reuters.com/article/domesticNews/idUKL0275401620080602
LONDON (Reuters) - Police seized thousands of safe deposit boxes from three vaults in central and north London on Monday after receiving intelligence they were used by criminals to store cash, guns and drugs.

Two people were arrested in the raids, which also included two other business premises and three private addresses in London and Hertfordshire.

Police sources said up to 90 percent of the boxes could contain the proceeds of crime and other illegal items such as child pornography.

The vaults are estimated to contain around 7,000 boxes, although it is unclear how many have been in use.

"We believe this police operation has the potential to simultaneously impact upon a large number of criminal networks, in London, nationally and globally," said Assistant Commissioner John Yates.

"Intelligence gathered over a protracted period has indicated that there are potential links at these businesses to organised crime such as paedophilia, firearms, drug trafficking, fraud, human trafficking, prostitution and money laundering."

Police will take the boxes away to a secure location. Any not claimed by their owners will be forced open and the contents investigated.

"Each safe deposit box will be treated as a single, potential crime scene," said Yates.

Police said the scale of the raids, codenamed Operation Rize, was unprecedented and involved 300 officers.

Courts have given police warrants to search individual security boxes in the past, but never this many at one time.

The operation began after police went round safety deposit firms in London reminding them of their responsibilities under legislation covering money laundering and the proceeds of crime.

While other firms were found to be compliant, officers became suspicious about the company raided, which appeared to be turning a blind eye to the rules.

Tough regulations requiring banks and financial institutions to "know their customers" have made it difficult for criminals to deposit large amounts of cash.

A website for the raided business stresses that "discretion is always assured" and that "you need never disclose the contents of your box to anyone."

Police said customers wishing to collect their belongings should not go to the raided vaults but contact a special call centre on 0800 030 4613.

Art Hostage comments:
This investigation started out looking for stolen artworks held in deposit boxes, diamonds as well as high value stolen art.
It has mutated into this and it will be interesting to see how much stolen art is recovered ?
Calls across the pond to the FBI have already been made and agents from Ireland, America, Spain etc will be decending on London over the coming days.
Police were forced to act today as their undercover informant was exposed.
The whole operation shifted gear a few weeks ago and the results can been seen today.
More to follow.............................
Posted by Art Hostage at 7:28 pm