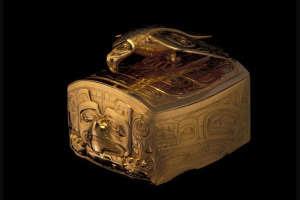 Today at 2:00pm, the RCMP in B.C. held a press conference in relation to the UBC Museum of Anthropology stolen artwork investigation at the Surrey Federal Operations Building.

On May 24 2008 - University Detachment of the RCMP was called to investigate a break and enter at the UBC Museum of Anthropology where several very valuable pieces of artwork were stolen. The RCMP were immediately advised of the cultural importance of these pieces. From the onset this matter was assigned the utmost priority and urgency. A very integrated multi-jurisdictional investigative team was formed to assist University Detachment. This team included a number of investigators and specialized support units from around the Lower Mainland District and E Division Headquarters. E Division Major Crimes Unit is leading this active and ongoing investigation that involves municipal, provincial and federal resources.

This team has worked tirelessly and around the clock investigating this crime that has attracted international attention. The investigation actively pursued a number of tips and investigative leads that resulted in the identification of suspects and in the execution of two search warrants in the Lower Mainland.

The primary objective for this investigative team has always been on the safe return of these national treasures. I am very pleased to announce this objective has been achieved and that most of these stolen articles have been recovered.

On Sunday June 8 after two weeks of exhaustive investigation, investigators from the E Division Serious Crime Unit involving up to 50 investigators from a variety of specialized units and detachments applied for and were granted search warrants to search two residences in the Lower Mainland. On executing those search warrants, three individuals were taken into custody. After searching both residences extensively, all but two stolen Bill Reid art exhibits were recovered intact. The substantive items including the most prized which is the gold box with an eagle was recovered.

This investigation included an in-depth examination of the circumstances of the break and entry and the alarm and video-monitoring system within the museum. In order to do that, specialized resources from our integrated technical crimes unit and special engineering sections were utilized. In addition, a number of investigative avenues were immediately initiated. One of those investigative avenues led investigators to persons of interest and their associates. Given the cultural significance of the stolen items, all available investigative avenues were pursued including 24 hour surveillance, search warrants and a cash reward.

While we are satisfied that we have recovered most of the stolen items, the RCMP would like to seek the public’s assistance in recovering the last two items which we have reason to believe are still in the Lower Mainland area. Our investigation to date indicates those items likely went to a local buyer or stolen property broker.

This investigation is far from over. Although we are very satisfied that we have been able to recover the majority of the items, we remain determined to recover the last two pieces.

If anyone has information as to the whereabouts of these pieces of the collection, please contact 778-886-2870 or Crime Stoppers.
Art Hostage Comments:
Bewdy, as they say in Australia !!!!
It really is a beautiful day, over to the boys from U2:
http://www.youtube.com/watch?v=u6FwEJwwYcQ

This is where the fun starts.

First of all the three people arrested in possession of the Bill Reid Icons have all been released without charge, strange don't you think ???

The biggest cultural heist in Canadian history and those caught in possession of the Bill Reid Icons walk as if it were a mere misdemeanor.

Second, the two outstanding items are an argillite panel and Eagle pin by Bill Reid.

These are sitting in Irv's pawn shop and will be recovered shortly.

The Mexican necklaces have been dismantled and were going to be sold for melt until Art Hostage stepped in last Wednesday.

The original thieves have been described as "Unsophisticated Lower Mainland career criminals" which seems absurd given the sophisticated manner in which the theft was carried out.

We all know "Danny Boy"Gerald Daniel Blanchard/Aaron Syberg and co were behind the Bill Reid theft so lets see this thing unfold and see if the mainstream media will sit on their hands in a subservient manner.