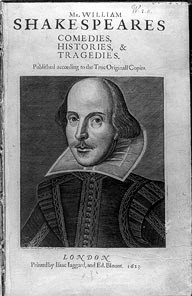 By Richard Alleyne and Paul Stokes

A £15 million First Folio edition of the complete works of Shakespeare stolen 10 years ago from a British university has been recovered after an English book dealer handed it into an American library.

The anthology, printed in 1623, seven years after the bard's death, is described as "the most important printed book in the English language" and was among a number of manuscripts taken from the Durham University Library in December 1998.

It is believed the book, the definitive collection of Shakespeare plays from which most subsequent editions are based, would have a market value of at least £15 million if it was ever sold.

Yesterday Durham Police confirmed that Raymond Scott, 51, had showed it to staff at a prestigious library in Washington DC, and asked them to verify it was genuine.

Explaining that he was an international businessman who had acquired the volume in Cuba, he left it with librarians, whose research revealed it to have been stolen.

The findings sparked an international manhunt involving the Durham force and America's Federal Bureau of Investigation and to the arrest of Mr Scott at his home in Sunderland which he shared with his 80-year-old mother Hannah.

Only 1,000 of the highly decorated First Folios were ever printed and it is believed that only 228 still exist - more than a third of them in the Folger Shakespeare Library, where it was handed in.

The last time one came up at auction, it went for £2.5 million.

"Like Shakespeare himself, this book is a national treasure giving a rare and beautiful snapshot of Britain's incredible literary heritage.

"I'll certainly be joining the crowds who will be eagerly welcoming it home."

When the First Folio was stolen they were described as a "unique and irreplaceable part of the region's heritage" and would be virtually impossible to sell to legitimate buyers.

Books included two works by the 10th Century scholar Aelfric that were printed in 1566, a first edition version of Beowulf printed in 1815 and a 1612 book of maps and poetry.

The stolen items were among more than 50 exhibits charting the progress of English literature from the Middle Ages to the 20th century which had been on public show in two rooms of the library.

Glass topped display cabinets had been forced and the two medieval manuscripts and five books had disappeared.

Vice-Chancellor of Durham University Professor Chris Higgins said: "Staff and the community felt a huge sense of loss when the books were stolen, so you can imagine my excitement and delight when I received the call from the police to say the First Folio had been found."

Detective Superintendent Andy Reddick, who is co-ordinating the inquiry, said the Shakespeare remains in the safe care of the Washington library.

He added: "A search of the house at Washington (Sunderland) began yesterday and that will continue today."

According to neighbours Mr Scott is a far cry from the image of international art thieves who were originally blamed for the theft.

Despite living in his mother's modern semi-detached house, he dressed in Armani suits and drove a succession of expensive cars including a balck Lamborghini, Rolls-Royce and lately a silver Ferrari with the personalised number plate M1 TZI.

Neighbours recall him washing the car while dressed in a silk dressing gown and slippers and also sitting on a plastic chair in his immaculately kept tiny front garden in a designer suit with a glass of white wine in one hand and a book in the other on fine days. He wore thick rimmed "Michael Cain-style" black spectacles.

Another neighbour, whose father knew him well, said he was "a kind and generous' man who regularly brought gifts back from his travels abroad.

"He was just a perfect gentleman,' she said. 'He would travel abroad regularly to Monte Carlo, Monaco, Cuba, Paris and would bring back cigars and football shirts for his friends.

"On his most recent trip he flew to Cuba for two weeks. On his way back he stopped off in Paris. He was just a wealthy man who was enjoying his money whilst taking care of his mother.

"He always struck me as a nice man who was always friendly. I couldn't believe it yesterday when he was led away from the house in handcuffs."

Art Hostage comments:
Shakespeare found it very difficult to drink beer throughout his life, why ??
Well, every time Shakespeare went into a pub or bar and ordered a drink of beer, the owner replied "Your Bard"
Scott must be suffering from self destruct syndrome !!!
Posted by Art Hostage at 9:06 pm